An Abridged History of the Super Bowl Post-Game Show

If my lifestyle rose to the level of a religion, or even a broad spirituality, this evening would be one of the holiest of the year. 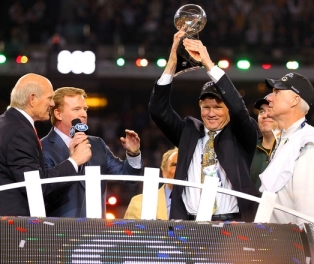 Tonight marks the start of the NFL season, the fantasy football season, and worthwhile network television watching after months of navigating barren landscape with nothing but a lifeless, hopeless horizon in every direction.

We begin again the joyous march toward the Super Bowl.

Rather than focus on beginnings, however, I decided today to focus on the end.

Specifically, the end of the end: The Super Bowl post-game show.

The event has evolved quite a bit over the years, due as much to improvements in technology as shifts in expectations by audiences or networks.  Yet, elements present in the earliest round of broadcasts persist even today.

The 1970’s gave us just about what you would expect: Bare-bones production values by today’s standards with minimal onscreen graphics and a general sense of chaos.  Interviews were conducted either in the locker room or at a makeshift holding area built to resemble a press room (but actually a set reserved exclusively for network commentators, rather than the media at large).

Attempts to integrate video highlights were spotty, again as the result of the less-reliable and slower production abilities of the time.  Fan interaction, or at least the inability to keep fans away from network production, was also more prominent during those early days.

Not everything in the video below will feel foreign to modern audiences, however.  Even among the primitive designs and various gaffes[1], some familiar elements stand out.  A rehearsed but appropriate speech from the Commissioner[2].  A ceremonial passing of the trophy to the owner of the team.  Network cross-promotion[3], although primitive and far less pervasive than what we would get in later years.

Presentation got better in the 1980’s.  Networks provided a fully-functioning (if modest) podium and backdrop in the locker room.  Chyron had almost been perfected by this point.  New traditions began to emerge, such as the now-passe post-game phone call from the President of the United States[4].  Interviews with losing players and coaches also became a perennial part of the show[5], another element that persists to the present, and one that cranked up the cringe factor exponentially.

Network executives and the NFL realized by the mid-1990’s that trying to cram a post-game production into a standard locker room was just too much of a hassle.  So, someone had the bright idea to keep the winning team on the field and simply conduct the post-game show there.

Owners’ speeches became more over-the-top and pompous, especially for those who had won before[6].  Network synergy also took a big step forward (or backward, depending on your perspective), as post-game shows didn’t just lead in to heavily-advertised new programs, but actually began to meld with network programming like a morbidly-obese person to so much leather sofa.

Not all of the production kinks had been worked out[7], but, by a decade or so ago, the format, direction, and structure began to resemble exactly what we see with today’s post-game show.

The most powerful sports league in the United States now controls more aspects of its own marketing and production.  Unsurprisingly, the hallmark of the current era of Super Bowl post-game shows is uniformity.

While previous iterations certainly had common facets and beats, the current celebratory spectacle changes very little from year to year.  Aside from different network personalities asking the softball questions, different aging NFL greats handling the Lombardi Trophy, and onscreen graphics and bugs for different programming appearing[8], there’s very little to differentiate one presentation from another.

Note how interchangeable the presentation has become.  Even details like camera angles and background music remain nearly identical – which is probably just how the NFL wants it.

The National Football League is easily the most successful sports enterprise in North America, if not the world.  Whereas other organizations fight over smaller and smaller scraps of television viewership, the NFL amazingly continues to become more popular in absolute terms, not just in relative ones.  As a result, the league isn’t disposed to make any big changes in any aspects of its presentation[9].

For that reason, it would be foolish to predict what the Super Bowl post-game show might look like in another five years’ time.  It might look exactly the same (albeit in 3-D).

If anything, the networks may cut out the middle men and have the stars of the 2017 equivalent of Criminal Minds or Alias handle interviewing a downtrodden Norv Turner themselves.

[1] My favorite might be a young-ish Larry Merchant struggling to sit in his chair near the very end of the clip.  Also, it’s amazing to look at Fred Biletnikoff and realize he was a legitimate NFL star and the MVP of the Super Bowl that day.  He didn’t look like a typical NFL great even in 1977.  I’m not sure he could pass for an NFL football player on Halloween today.
[2] I feel the need to capitalize it when we’re talking about Pete Rozelle.  Also, his comments always seemed a little more dignified and intelligent than the trying-too-hard-to-sound-clever efforts we get from Goodell today.
[3] Also note that CBS was cross-promoting the CBS News coverage of the Democratic and Republican Conventions, not a terrible sitcom.  What a different world.
[4] The end of which nearly always included a cornball request to enlist a victorious team or player’s services on Capitol Hill.  I’m not sure what duties someone like Marcus Allen or Jim McMahon would have been able to perform if they had decided to take the president up on his offer.  I would have enjoyed watching that.
[5] I could be wrong, but the only person I ever recall seeing take a phone call from the president as a losing coach was Don Shula after Super Bowl XVII.  He took it in stride.  It’s probably easier to do that when you’ve already won a couple.
[6] Witness Terry Bradshaw practically rip the microphone from Robert Kraft’s hand at the end of the clip.
[7] Confetti overload at 3:01.
[8] Check out the Fox graphics beginning around 0:33.  Not only do we get NFL fantasy info at the bottom (sponsored by Cadillac), but we also get a separate Caddy logo, plus a logo to remind us to stay tuned for a very special House, immediately following the game.  Ugh.
[9] Excluding aspects related to technological advances, such as smartphone apps or Sunday Ticket’s expansion to the Playstation 3, for instance.