I’ve recently become a contributor for a website called A New Voice.  It’s a commentary site with its focus on pop culture and politics (especially the intersection of the two), with a right-of-center point of view and an additional goal of outreach for a youth- and minority-oriented audience.  This is my most recent piece.

As someone who worries about a future robotic takeover, I’m cautiously optimistic that the Bristol Robotics Laboratory announced in a recent press release that it would spearhead a research effort to make robots more “trustworthy.”

But the BRL’s research goes a step beyond mere concerns about a malfunction or design flaw injuring a human. 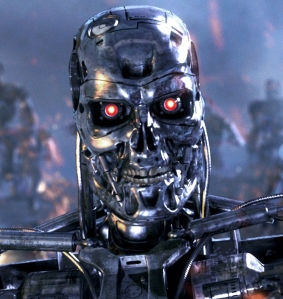 Say hello to your future master (or murderer).

From the press release: “[I]t is still crucial to understand not only whether the robot makes safe moves, but whether it knowingly or deliberately makes unsafe moves.” (emphasis mine)

Translation?  The good folks at the BRL know that it may be just a matter of time before disgruntled robots turn on their unwitting and vulnerable makers (i.e. you and me).

The program, called the “Trustworthy Robotic Assistants,” or “TRA” project, has already made use of a robot named BERT to test scenarios in manufacturing where a human employee collaborates with a (possibly sinister, scheming) robot coworker.

There will also be more mundane experiments conducted in the University of Hertfordshire’s “Robot House.”  Such experiments will deal with everyday interaction between humans and robots in home-assistance scenarios.  This seems wise, as the opening salvo of any robot revolution would undoubtedly take place in our kitchens and bathrooms.

“Safety assurance of robots is an urgent research challenge that must be addressed before many products that already exist in labs can be unlocked for mass production,” explains Dr. Kerstin Eder, the principle investigator for the BRL.

The project will cost the equivalent of 1.8 million dollars and take three-and-a-half years to finish.  Luckily, the projected completion date of my robot-proof bunker is only two years away.  The BRL research is especially crucial as advances in artificial intelligence steamroll toward a possible AI singularity that would see robots equal (and then surpass) human intelligence.

I can only hope the BRL isn’t too late to spare us all from our otherwise-certain doom.  Godspeed, Brits.

I’ll be in my bunker if you need me.