I figured the season premiere of 30 Rock was as good a time as any to renew the weekly comedy showdown known as “SitCombat.” Archer comes back next week, so the opening contest of the year will be a one-on-one affair.

I would be irresponsible if I failed to mention two things in fairness to the shows that aren’t 30 Rock:

First, Archer had a very funny, three-episode “mini-season” that aired back in September.  The “Heart of Archness” episodes continued the writers’ hot streak from the end of Season Two.  I’ll take these episodes into consideration at the end of the year when I determine who won the 2011-12 season.  For now, suffice it to say that they did a great job of wrapping up the loose ends from last year and setting up what promises to be a terrific Season Three.

Archer has been uneven at times—wildly funny when it’s “on,” but sometimes going in directions that don’t pan out.  I think the writers now have a great handle on what works and what doesn’t, and we’ll see an even higher ratio of good stuff this year.

Secondly, The Office has been solid so far this season in the face of some adversity.  The Office has the highest degree of difficulty of the three shows.  Whereas 30 Rock had some off-screen issues with which to deal last year, the Office obviously had to replace the biggest star on the show after Steve Carell’s departure late last season coming into 2011-12.

Despite what some believe, I think that the overall level of this season’s episodes have been on par with last season’s, if not better.  The writing staff is to be commended for not only continuing to create a good sitcom, but also for successfully integrating new elements of the show (Andy as boss, Robert California) with existing characters and plot devices.

Speaking of the Office, I’ll start this time with a look at tonight’s effort:

Tonight’s Episode: Andy looks to make good on his previously-stated goal of doubling the sales at the Scranton office, while Dwight goes to Sabre corporate to make a play for a manager position.

Good Stuff: “Let’s get high on our own supply [of paper]” . . . “Surrounded by shrubbery…like a squirrel’s office . . . Kevin offering to make that error . . . Andy’s plan to close the sales gap by entering the trivia contest . . . “Let’s reverse engineer this…” . . . “SEE-attle” . . . Queerenstein Bears . . . “Florida is America’s basement” . . . “Marion Cotillard… (looks into camera) exposes herself a number of times in that film,” and Creed nodding in the background as Kevin says that line . . . The Einsteins winning and the “A” team losing was fairly obvious, but I thought it came of well.

Non-good Stuff: The opening was a zero, but I guess they can’t all be great . . . Gabe apparently not understanding the term “put out a fire” . . . We get it. Robert California is a weirdo. The in-home wrestling was a little much . . . The entire “B” plot seemed like filler . . . Has the new girl (whose name I can’t even remember) had a line in weeks?

Line of the Night: “You’re a perfectly fine toilet. I’m just an extraordinary piece of crap.” – Dwight, using Gabe’s metaphor against him.

Overall: This was a great example of an episode with a decent “A” story and no real “B” story.  Other than the line of the night, the Dwight storyline wasn’t memorable and seemed fairly circular, or even pointless.  This also wasn’t the best use of the usually strong Robert California.  I alluded to the fact that the show has defied the conventional wisdom of a lot of experts by remaining funny this season despite the loss of Carrell.  This episode wasn’t a great showcase for that.  This was perfectly fine television, but only earned a few chuckles.  I suspect this episode won’t even be in the top fifteen shows The Office does this season.  This episode also followed the trend of the show having a tougher time when everyone leaves the office as a group for most of the episode.  Those shows are usually hit-or-miss. This one wasn’t bad, but it definitely wasn’t a winner.

Tonight’s Episode: Liz returns to New York with a surprising new outlook on life, Kenneth prepares for the impending Rapture, and Jenna enjoys a successful side gig as a reality show judge.

Non-good Stuff: Not sure why Liz gets her meds from some dude at Penn Station . . . I didn’t mind the twist ending, but I’m wary of Jack’s reaction.  He seemed downtrodden about the fact that Liz has a secret boyfriend.  Liz and Jack’s relationship should stay platonic.  I think anything else would severely damage the chemistry of the show.  I’m not saying that’s where the show is headed.  I’m just saying that reaction gave me pause.  I’m not sure what his game is . . . No Katrina Bowden in the season premiere?

Overall: Unsurprisingly, this was a great episode. 30 Rock traditionally starts very strong out of the gate, and this was no exception. The writers juggled all three storylines (Liz’s mysterious transformation, Kenneth’s rapture preparation, and Jenna’s reality show stint) well. I’m normally not a fan of having a “C” (or even “B”) story for its own sake, but all three in this episode could stand on their own.

Final Thoughts: I’ve been accused of having a bias in favor of 30 Rock, but that’s actually nonsense.  Although I think 30 Rock is the better show, that’s based entirely on empirical evidence from a 100-plus episode sample size.  I always come in with a clean slate and an open mind when I watch the shows each week. 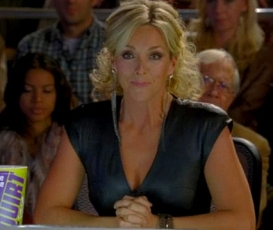 The Office has triumphed many times, but, as with tonight, 30 Rock wins more often than its competition.  I’m not surprised by the 30 Rock win for its season premiere, especially considering the extra-long layoff thanks to Tina Fey’s pregnancy.  I think there’s a decent shot this could be the best season of 30 Rock, especially if Alec Baldwin decides to call it a day.  A good 30 Rock and a mediocre Office add up to an easy win for Baldwin and company on 1/12/12.