Untimely Movie Review: An American in Paris and Singin’ in the Rain

The next two movies in the Warner Bros. 50 Film Collection are a pair of Gene Kelly musicals I’ll review in tandem: An American in Paris and Singin’ in the Rain.  These films present something of a dilemma for me as a “reviewer,” a term I use in the loosest sense allowable. 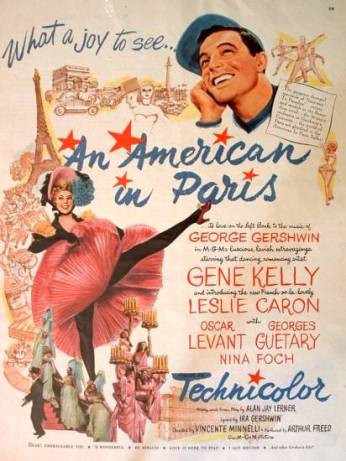 Specifically, I don’t care for musicals.

Let’s see how this goes.

The 1951 winner for Best Picture, An American in Paris is the story of Jerry Mulligan (Kelly) persistently stalking and, it being 1951, therefore successfully wooing Lise (Leslie Caron).  The plot is really just a simple contrivance to get from one musical number to another, not that that’s necessarily a bad thing.

Back to that dilemma I mentioned a moment ago.  There’s the question of my personal taste versus the objective merit of the movies.  An American in Paris just didn’t appeal to me subjectively.  Objectively, on the other hand, there’s no question that this is an incredibly well-crafted production worthy of the acclaim it received back in the early 50s.

It’s a visually striking, colorful movie, particularly the climactic ballet scene.  Speaking of color, this happens to be the first film in the collection since Gone with the Wind that was shot entirely in color.  The scenery and costumes make the most of the expansive palette.

As a sidebar, it’s strange to me that it took so long for color to become near-universal in film.  Gone with the Wind and The Wizard of Oz showed the potential for color in the late 1930s.  Yet, it isn’t until more than a decade later that color ultimately prevails, except when black and white is used for specific artistic effect (e.g. Schindler’s List).

This is bizarre.  It’s akin to an alternate reality in which the Super Bowl were shown in high-definition in 2000, then didn’t switch to HD for good until 2012.

Anyway, all of the main cast can sing, dance, or play music well (sometimes all three), except for Nina Foch, who isn’t there to do any of that.  Kelly is particularly gifted in this regard.

The Gershwin-penned music is memorable, the choreography is impressive, and the plot, as I alluded to, is fairly flimsy.  I did enjoy it when Mulligan comes to believe that Milo Roberts (Foch) has hired him as a male prostitute, however.

The ending makes almost no sense, as what amounts to an extended, lavish daydream by Mulligan inexplicably compels Lise to change her mind about pairing off with him.  But oh well.

One thing about musicals is that they usually have great pacing, and this one is no exception.  Other than the clumsy, multi-voiceover opening scene that drops a heavy exposition bomb, the flow of An American in Paris is seamless.  As much as I don’t cotton to this genre, I freely admit that I was never bored by this film.

If you like vibrant musicals, you can’t go wrong, here.  You’ll love it.  Objectively, as I said, there’s no denying that this is a classic American film, with Gene Kelly at the height of his powers. 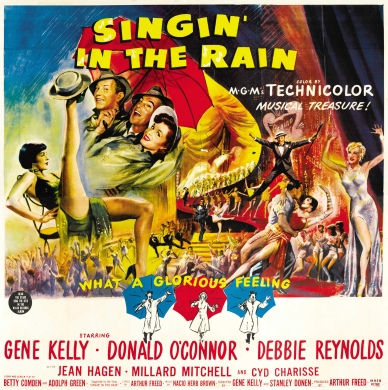 Flash-forward to 1952, and Kelly returns in Singin’ in the Rain, a movie “inspired by” the song of the same name.  You know, just like Convoy.

Kelly plays stuntman-turned-star Don Lockwood, who, along with best friend Cosmo Brown (Donald O’Connor) and begrudging co-star Lina Lamont (Jean Hagen), has to navigate the transition from silent film to “talkies” in the late 1920s.

The strange thing about Singin’ in the Rain is that, although well-received, it didn’t reach nearly the amount of contemporaneous acclaim that An American in Paris garnered.  Not only did Singin’ in the Rain not win Best Picture, as had its predecessor, but it was barely even nominated for any Academy Awards: Only Hagen (Best Supporting Actress) and the musical score received nods from the Academy.  Neither won.

I now realize that this level of praise is entirely warranted.

Singin’ in the Rain has musical / dance numbers on par with Best-Picture-Winner An American in Paris, but adds to the mix a much meatier story that is, above all else, remarkably funny.  I found myself laughing out loud several times.  That’s an especially noteworthy accomplishment for a film produced so long before the existence of anything resembling modern comedic sensibilities.

Whereas An American in Paris has a barebones premise, Singin’ in the Rain takes a topic that is intrinsically interesting and partially based on fact and melds it with great music and dancing.  There was also a nostalgic angle that’s lost on modern audiences: Nearly all of the songs from the film were taken from musicals from the late 1920s through the 1930s.  Whereas the distinction between a popular song from 1932 and one from 1952 might be lost on someone watching the film today, that was yet another appealing element to moviegoers during the film’s original run.

While both of these titles are certainly worth seeing for any film aficionado, in the case of Singin’ in the Rain, I would recommend it to anyone who even remotely enjoys movies.  In fact, I would go as far as to say that Singin’ in the Rain is neck-and-neck with Casablanca for the honor of being the best film I’ve seen in this collection so far.  Given the competition, that’s saying quite a bit.

5 Responses to Untimely Movie Review: An American in Paris and Singin’ in the Rain