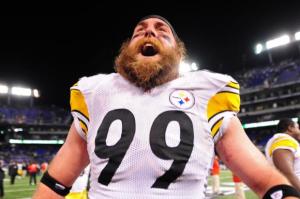 accurate) conference championship previews: No serious research, just bloggy ramblings off the top of my head.  Setting the bar low . . .

The most surprising subplot for me in this year’s Super Bowl is the fact that Green Bay is somehow a favorite.  I’m not even talking about the Vegas oddsmakers.*   I saw an ESPN SportsNation poll this week where the consensus in about 47 states was that Green Bay was going to win.  This makes little sense.

Granted, the Steelers have some offensive line issues after a rash of injuries against the Jets, but remember that this somewhat makeshift unit still managed to open big holes for Rashard Mendenhall against the vaunted New York defense.  This Packers team lost six times during the regular season, has about two players with Super Bowl experience, and is missing their third-best skill player and starting running back, both of their top two tight ends, and a couple of defensive starters.  That’s to say nothing of the fact that the Packers nearly let the game against Chicago slip away versus a third-string quarterback.

Yet, Green Bay, not Pittsburgh, is the favorite.

I think the logic goes something like this: While Green Bay has over a dozen players on IR, those injuries happened months ago.   The current incarnation of the Packers has been playing together through the toughest stretch of the season.  The Steelers will have to adjust to their fresh injuries on the fly.

I suppose that line of reasoning holds up to an extent.   But let’s not forget that the AFC is stronger than the NFC from top to bottom, or that the Steelers have won two recent Super Bowls, including one just two years ago.

I bring up that first point because it’s sometimes easy to think two teams are comparable because they’ve had similar runs in the playoffs. “Ok, Green Bay won two tight games (plus a blowout over Atlanta) to get here, and Pittsburgh more or less did the same. Neither has played great, and both won conference title games that weren’t that far from breaking the other way.  These two teams are very evenly-matched.”

But that’s only true if their respective conferences are roughly comparable. The Steelers had to beat the Ravens and the Jets to get to Super Bowl XLV.  Both of those teams are better than any of the teams the Packers have defeated so far.   On the other hand, Green Bay did have to win three road games, and that’s very impressive.

What also baffles me about the lead-up to the game is how many experts are predicting that this game will be “a classic,” or has a chance to be “the best Super Bowl ever.”   Aside from the usual ESPNonsense that tabs everything as either the best or worst in history, there’s something more at play.

I think that we’ve been so spoiled by good Super Bowls of late that the people who cover the games are starting to take that for granted.   This is the reverse of the phenomenon we had when I was growing up, as it was all but a foregone conclusion that the NFC would win, and there was about a 75% chance that the game wouldn’t be competitive.**

I think the experts have it all wrong this year.  The scores I’ve seen predicted are almost all of the 28-27 or 35-31 variety.  If there’s one thing about which I feel strongly, it’s that anyone betting on this game should take the “under.” The current over/under is somewhere around 45.5. If the game is 24-21, that doesn’t get it done.

Now, I couldn’t care less about the gambling aspect.  I’m not wagering on the game.  I bring it up because I think a high-scoring contest is wishful thinking.   Despite the largely great play by both Aaron Rodgers and Ben Roethlisberger during crucial moments this year, both teams’ defenses are the beginning and end of the story.   Pittsburgh’s offense hasn’t put together two good halves since the regular season.  Green Bay has no real running game*** after being decimated by injuries, so as goes Rodgers, so goes the Packer offense.

The defenses are another story.  Both have high-profile players at all three levels (Polamalu, Harrison/Woodley, Keisel for the Steelers; Woodson, Matthews, Raji/Jenkins for the Pack), and feature the #1 and #2 scoring defenses in the league, respectively.

Because I’m rooting for a good game, just like every football fan, I, too, will say it will be close.  However, the ESPN experts hoping for a game with both teams in the 30’s will be sorely disappointed.

I’ll wrap up with a few key points about the game itself:

1. The Steelers are practically invincible against quarterbacks who have to think for even a split-second about reads or adjustments.   The quarterbacks who fare well against the Steelers are players who are so poised and savvy that their performances seem almost devoid of conscious thought.   There are only a handful of second-nature players in the NFL, but Aaron Rodgers has become one of them.

2. Tempering this is the fact that Aaron Rodgers, more than any QB in the league, can look really good without his performance actually matching the visual. He’ll complete five straight passes on a drive, and you’ll think, “He’s on fire. He won’t be stopped today.” Then he’ll do it again later in the game, and you’ll remind yourself of just how great he is.  The next thing you know, the game is over, and he’s thrown for 275 yards, one touchdown, two interceptions, and a QB rating hovering around 78, and you’ll wonder, “How the hell did that happen?  He looked fantastic . . . didn’t he?” The performance will have to match the highlights today.  Consistency, one turnover or fewer, 300+ yards, two touchdown passes or better.  That’s a tough job against this defense.   It also goes without saying that the Packers can’t give up any big hits on the twice-concussed Rodgers.

3. People seem to have talked themselves into thinking Roethlisberger is an elite (as in Top three) NFL quarterback.   I think he’s very good, his physicality makes him special, and there’s no doubt he’s a winner.  However, I think his reputation has been enhanced greatly by having two rings fairly early in his career.  The truth is that he’s one of only two starting quarterbacks in history to win at least two Super Bowls and not have a Super Bowl MVP award. Here are his stat lines for his two wins:

Certainly, he was much better the second time around. Consider, though, that he had never thrown a Super Bowl touchdown pass until the game-winner to Santonio Holmes during the waning moments of XLIII.  Winning has a way of whitewashing some of the past.

My prediction is that, should the Steelers lose, Roethlisberger’s legacy will change dramatically.   Forget about the off-field stuff for a second.   I just meant that suddenly being imperfect in the Super Bowl will raise the level of scrutiny applied to Big Ben’s past performances.  The pendulum will swing back from “He’s one of the very best quarterbacks in the NFL” to “His defense and running game carried him all these years. He’s only a little above-average.”  As usual, the truth will lie somewhere in-between these extremes.

In many respects, Roethlisberger is like the anti-Kurt Warner. Warner rarely gets into the conversation when the great big game quarterbacks of all time (or even the last thirty years) are mentioned.   In fact, however, he has the #1, #2, and #3 yardage performances in Super Bowl history.  But he only won one of them.   So, his place in the annals of the NFL is necessarily altered as a result.

If Ben loses, expect him to drop several notches in the conventional wisdom ranking of current NFL quarterback greatness.

4. Most football fans know that we’ve never had a Super Bowl go to overtime.  All I’ll say is this: If that happens today, and the team that gets the ball first kicks a field goal, I expect at least half of the corporate-heavy crowd to think the game is over and begin walking back to their limos or luxurious company cars.

5. I’m rooting for the Packers, and I think it’s coloring my view of the game a bit.  Note that I have nothing against the Steelers at all, but they’ve won two recently, and I normally root for the team that’s gone longer without a title.  You know, because I’m so egalitarian.

Anyway, that’s why it’s tough to pick a winner.   My football mind says that Pittsburgh is still the better team.   Yes, injuries are a concern, but Pittsburgh this year is every bit as good as the teams that won XL and XLIII.  If I were a Steeler fan, I would be worried about the “one good half, one bad half” trend of late.  It’s tough to win a Super Bowl that way.

In the end, I’m going to say the game comes down to a field goal attempt by Shaun Suisham.  If he makes it, Pittsburgh wins 17-16.  If he misses, the Steelers lose 16-14.

I saw Suisham miss enough critical, short field goals during his Redskins tenure to buy into the Packers pulling out the victory.

And a defensive player will win the MVP award.

*That’s less of an indicator than people might realize.  Yes, in a general sense, the team that’s favored to win by Vegas is the team that’s a “favorite” to win in the minds of the experts.  However, as anyone who has any experience gambling on sports will tell you, the purpose of setting a line is to (say it with me, gamblers) get equal betting on both sides.  That’s how the books make money.

**There have been 44 Super Bowls played as of this writing.  Five of the last eleven, and possibly six or seven of the last eleven, are among the ten best ever played.   Contrast that to my childhood, when the NFC won fifteen of sixteen, including thirteen straight from the 1984 season (January of 1985) through 1996.  From Super Bowl XVIII through Super Bowl XXIX (twelve games), nine of those contests were decided by at least 17-point margins, and the Redskins’ 37-24 win over Buffalo wasn’t nearly that close.

***Except in short-yardage.   Think about this: Injuries have turned this team into Andy Reid’s wildest offensive fantasy (no real running game, have to think pass first at almost all times), yet the Packers still manage to be able to run the ball for first downs on third-and-short, something the Eagles have never been able to do consistently since Reid has been in Philly.  I will always loathe that with every fiber of my being.  In the shotgun on third-and-a-long-one?!?  Ugh.  Get the straightjacket ready.