Fish-related Puns Are Too Easy 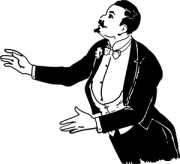 has been ruffling the feathers of our Chinese non-enemies this week.  The trick, which appears to approximate a synchronized swimming routine, except with a half-dozen Chinese goldfish, is alleged by numerous animal rights groups to rely on feeding the fish magnets in order to dictate their underwater movements.

I care a lot about animals, but I have to admit that my first reaction was, “This guy is a genius.”

The fact that the activists have no proof of cruelty, yet have gotten magician Fu Yandong in serious trouble (and the trick pulled from television) seems absurd to me.  Whatever happened to the ancient jurisprudential concept of “non-cruel until proven magnetic?”

Fu has taken some extraordinary steps in response to the outcry.  Specifically, he says that he’ll violate the sacred magician’s code and reveal the secret of the trick in the near future in order to silence his critics.

My guess is that he’s furiously working on a new way to do the trick before the vague deadline.

5 Responses to Fish-related Puns Are Too Easy