Yesterday was quite a day around these parts.*  I can think of no better way to follow up an academic-style commentary

about the Obama Administration’s decision to cease defending DOMA than with an analysis of the relative merits of three Thursday night sitcoms.

I’ve been accused of underrating the Office two weeks in a row.  Let’s see if my detractors will continue to have fodder for their misguided attacks.

Here’s what the sitcom landscape looked like on February 24, 2011:

Tonight’s Episode: Todd Packer makes a triumphant return to Dunder-Mifflin as an internal salesman after a decade on the road.

Good Stuff: Dwight’s survival bunker food supply . . . Michael and Todd 20 years ago (and Creed looks the same) . . . Dwight’s ten reasons for giving Todd the hot chocolate . . . Jim and Dwight joining forces . . . Ryan signing up for three “Jam Sessions” on the sign-up sheet, and Kevin signing up for a “NAP” . . . Nard-dog’s reaction after Michael said “Packer never lived up to his parents’ expectations, Andy.”  That might have been my hardest laugh of the night . . . “Maybe you can go back down there and find me some extra sick days.”

Non-good Stuff: Actually having Ryan and his musical group show up for the jam session and explain they have a jam session!  Subtlety, people . . . Michael letting Packer go to Florida.  It’s one thing for him to realize Packer is a jerk.  It’s another for him to let this happen to him just because he said Holly was “uptight.”  And it doesn’t make much sense to boot.  Why wouldn’t Packer just come back in a week?  I’m guessing he gets eaten by alligators.

Overall: They’re having Michael gradually let go of his old ways and attachments as he prepares to head off into the sunset.  The Michael who leaves won’t be the one we’ve known all these years.  First, it was his self-consciousness and feeling of purposelessness that we saw evaporate last week.  Now, his loyalty and admiration of Todd Packer.  Both of these things come to pass as a result of something healthy (his relationship with Holly) replacing the unhealthy.  This is all fine, as long as they keep it funny.  This week, they kept it funny.  This was also an interesting contrast to last week’s over-the-top edition.  Every scene this time around took place inside the building.  That’s usually a good thing.

Tonight’s Episode: A blog (cough Jezebel parody cough) claims that TGS is anti-female, flustering Liz Lemon and causing her to fight back by trying to “convert” a decidedly non-feminist comedy writer.

Good Stuff: “Ohhh, my period—you’re all fired!” . . . “No, you are not budgeted—she’s got good energy—hire her immediately” . . . “New blood is the lifeblood of every company’s blood” . . . J. Fred Muggs references always score points with me.  I’m hoping they can work Kokomo, Jr. into a future broadcast.  I know, nobody under 60 knows who that is.  I get it . . . Lutz as a British guy . . . “Mine are different sizes” . . . “Does this look like the makeup room of a clown academy?” . . . Kenneth’s tribute to Jack being a pastiche of a Negro spiritual . . . “Now, power down, conversation robot” . . . “Well, that’s understandable.  I mean, Grossman is a little bagel-y” . . . “Quiet, chalk-hands.  A real man is talking” . . . I liked the twist with the teenager being a new arch-rival for Jack . . . Liz’ Eleanor Roosevelt voice . . . I always love it when Liz’ meddling backfires . . . Jenna’s double thumbs-up after the announcement that Liz is a Judas to all womankind.

Non-good Stuff: Man, two different sitcoms had jokes involving unfamiliarity with Justin Bieber and a mispronunciation of his name.  Sorry, 30 Rock, but you lose the points because you air later . . . the guy who played Bob Ballard (Broadway performer Terrence Mann) was weird in a bad way . . . Jack’s fantasy.  The guy’s a born businessman.  I don’t buy the semi-retconning that, somewhere deep down, he longs for a seafaring career.  But, obviously, for the plot to work, I guess we needed this.

Overall: As I’ve mentioned in the past, 30 Rock is operating short-handed as Jane Krakowski is pregnant in real life (although they’re doing a great job of hiding it) and Tracy Morgan deals with health issues.  This was a very good episode considering the degree of difficulty.  However, I don’t grade on a curve.  As it was, it was an entertaining half-hour that did a lot of things right and had the usual high joke quota, but it wasn’t one of the better episodes this year.

Tonight’s Episode: Woodhouse’s Double Deuce squadron-mates are dying off under mysterious circumstances.  Archer must unravel the mystery within those circumstances.
Good Stuff: The WWI flashback was fun . . . “I can do baby, or I can do geezer murder mystery, but I cannot do both” . . . Well, at least we know how Woodhouse became a heroin addict

Non-good Stuff: They’re keeping the baby around?  Why?  And we know it’s not even Archer’s.  This is unnecessary.  Wrap that up . . . Nit-picking: In the middle flashback, Woodhouse had a Cockney accent, but he has an upper-middle-class accent in the present and during WWI.  No bueno.

Overall: Nothing really happened this week.  Think about it: The murder plot turned out to be nonexistent.  Mrs. Archer didn’t do anything besides take care of a baby.  The best scenes were flashbacks that didn’t even include Sterling Archer at all.  What I will say is that this show was probably as good as an episode built around Woodhouse could be.  However, that’s a mighty low ceiling. 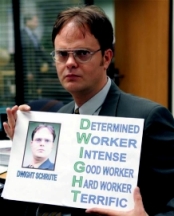 Final Thoughts: Archer continues its holding pattern as a slightly-above-average show that can’t measure up to the NBC programs (or its own first season).  The preview for next week looks good, though.  30 Rock had some great bits and lines as per usual, but the Office wins the night by a hair thanks to a very even, solid episode with a few strong moments.

*Getting a link courtesy of Andrew Sullivan at the Atlantic was pretty exciting.  As someone who has read his blog for a decade, it was a good feeling to get even a slight nod from one of the best political bloggers in the world.