The NBC shows are still in reruns, which could open the door for Archer to retain its title after a very strong showing last week.

Here’s a look at how things shook out for March 10, 2011 (with the appropriate “rerun penalties” doled out:

Tonight’s Episode: Andy attempts to bump up his sales with a faux seminar.

Good Stuff: Andy’s weekend in Boise . . . Erin not sure if Michael’s Greek character (Mikanos) was, in fact, Michael . . . The sales board . . . “Ok, yeah, like a character history.  Good.  Tom Hanks does that” . . . “The only way I’m Jim, is in the movie version, when Jim sees what his future would be like without Pam” . . . Kevin vomiting after going a little too far in the warm-up to his speech . . . The intermittent cuts to Jim killing time outside the office . . . Kelly’s branding philosophy . . . Creed’s speech . . . Darryl telling Andy about the jackals . . . Michael showing his “sales savant” side.  That always helps . . . The childhood pictures of Jim and Tom . . . Tom absolutely eviscerating Jim.  Specifically, “Where’s your jetpack, Zuckerberg?”

Non-good Stuff: The opening with David Brent was cute, but a little forced.  Gervais seemed a little rusty.  It felt like we got a three-quarter-speed Brent . . . I like that Erin is kind of dim, but the ending to the Scrabble game was a little much . . . Gabe is just an annoying puss . . . Michael awkwardly trying to kiss Holly.

Line of the Night: “We’re no more a team than the people staying in a hotel are a team.” – Dwight, crushing Andy’s hopes of unity.

Overall: Top-to-bottom, this was probably the second-best episode of the season to date.  Solid plot advancement without being heavy-handed, a good “B” story (Jim and Tom, not the Scrabble thing), and Andy in top form.  Giving the non-Jim-and-Pam characters a chance to get more “touches” is a good thing.  I think this episode and the one that preceded it were strong signs that the writers understand that the focus on the baby and perfect couple Jim and Pam was pushing the show in a direction that made it seem too “cutesy” and a bit stale.  They rebounded nicely a few episodes into this year, and this was another example of that.

GRADE: A-minus (downgraded to a B-plus as a rerun)

Good Stuff: “Ten o’clock in the morning” . . . Kenneth’s NBC dress blues . . . Jack “shushing” and consoling Liz when she observes that we’re in a “new golden age” of scripted television . . . “First of all – good morning” . . . Unclaimed Perfection Baby Boy . . . Tracy having to cancel his plan of buying two blimps and crashing them into each other to see what sound they make . . . Tracy coming up with various ideas to keep footage off the reality show for intellectual property reasons . . . “You really brought the song-writing computer’s words the life” . . . “I’m going to shoot garden gnomes at Tupac’s house” . . . Liz’s alternate realty wherein she teaches improv in an old folks’ home . . .

Non-good Stuff: The whole Lutz / car / apocalypse storyline didn’t click.  Unfortunately, it ate up a decent chunk of the twenty-two minutes.  And it really doesn’t make any sense that the others would care that Lutz just bought the car . . . the Billy Joel song idea (as mentioned above) was a good one, but the fact that neither Tracy Morgan nor Tina Fey can sing was a little distracting and hurt the execution.

Line of the Night: “HAHA . . . you wore a yellow hat to that coffee shop!” – Tracy, fondly remembering the online romance prank he played on Liz.

Overall: This was an episode that was better on paper than in practice.  It was still funny, to be sure, but a lot of the concepts from this episode didn’t quite pan out when put into action.  What’s particularly strange is that the episode did a lot of things that usually make for a great 30 Rock.  Namely, just about all of the cast members were prominently involved and Jack was doing “Jack things.”  For some reason, it wound up as a funny show that was still somehow less than the sum of its parts.

GRADE: B (downgraded to B-minus as a rerun)

Tonight’s Episode: A famous actress is granted access to ISIS in an effort to do research for an upcoming role.

Good Stuff: The show has always had a 60’s spy sensibility to it, with much of the scenery appearing as if it’s from that era or slightly after, yet the ISIS folks anachronistically watch video on their old-timey computers.  I enjoy that . . . “At least you fired downrange that time” . . . “Deaf people are gross.”  “Not as gross as the hook-hand ones!” . . . Cyril’s rewriting process . . . “Hey, who am I?  Kissinger?  Broad strokes!” . . . The flashback to why Archer didn’t pass as a counter-sniper . . . Archer using the Krieger-bots to mess with Lana . . . The Russian accent translator machine

Non-good Stuff: The “TV-MA” bug blocked out a bunch of visual humor in the open by covering up the Rona Thorne movie posters.  This is a huge pet peeve of mine, and I don’t whether to blame the network for making the bug so big, or the show’s creators for not knowing better . . . The ending felt abrupt and rushed.

Line of the Night: “You’re all rigid and still, which, you know, I’m all for—rimshot—but not on the range.” – Sterling Archer

Overall: Archer took a step back after last week’s fantastic episode.  This wasn’t a bad one, but it had a few more misses than the prior show.  The Rachel Harris character turning out to be a sleeper was a fairly obvious plot device that would have been fine had they pulled the trigger on it a bit earlier in the episode.  As a result, the pacing of the show felt very unbalanced.  There were still some good laughs, though, and I do enjoy the fact that it’s impossible to determine what year it is on Archer.  Sometimes it seems like it’s 1969.  Other times, 1976.  Still others, 1985.  And, just when you think it’s obvious it must be present-day after all, there’s another reference to “Soviets,” and Pam talks about having a VCR. 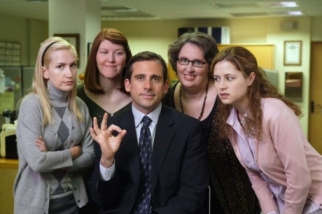 Even going up against reruns, Archer couldn’t hold on to the title it won last week.  The Office takes the honors for March 10, 2011 with an episode that is one of the three best of the current season.