The Office turned in an outstanding episode with last week’s “Tallahassee,” topping solid efforts from 30 Rock and Archer in the process.  Will Jim, Dwight, and company be able to

turn in another superior episode with the workforce divided?  Will Archer continue what looks to be its strongest season yet?  Will 30 Rock give Katrina Bowden more than one line?

More questions will be answered in this—SitCombat for February 23, 2012:

Tonight’s Episode: Liz gets a massive offer to take a billionaire former classmate’s virginity, Jack tries to use February 29 to make extra money, while the rest of the office celebrates Leap Day, including Tracy and his crew trying to spend $50,000 at Benihana.

Non-good Stuff: The three “k” thing seemed like a stretch . . . They took the “Tracy suddenly thinks Dot Com is fake” one joke too far . . . Having all the hot women show up simultaneously was silly, if necessary . . . the show jumped around more than usual this week, both in setting and in tone / pace.

Line of the Night: “That counts as us touching!” – Lutz, after overeating caused his shirt button to pop off and hit Cerie in the eye.

Overall: I appreciate the fact that they went for something a little ambitious here, but I think the premise got away from them a little bit.  The Tracy storyline petered out and didn’t have a strong conclusion.  The Jack storyline also seemed either missing some elements or condensed.  The episode worked best at the beginning, during the explanation of the premise.  Each of the plots had portions that clicked, but, unfortunately, portions that really didn’t.  One thing I did like about the episode is that just about everyone in the extended cast appeared.  This wasn’t one of the better episodes of the season, but a few good lines and (especially) the self-deprecating Carrey cameos helped salvage a decent grade.

Tonight’s Episode: Various characters deal with relationship issues or potential liaisons, both in Tallahassee and back in Scranton.

Non-good Stuff: Here’s the problem with the Kathy/Jim thing. She literally doesn’t haveany lines for weeks, then reveals her plan to go after Jim,then does so in the least subtle way possible . . . The confrontation between Val’s boyfriend and Daryl was incredibly contrived . . . Creed didn’t say a word this week, which always seems like a waste . . . I think Gabe probably needs to go away at this point.

Line(s) of the Night: I’m picking two this week, because both slayed me.

“Why would Erin confide in me that she’s staying here in Florida if she didn’t want me to make some sort of last-ditch, nothing-to-lose, Kelly Ka-whorun at her?” – Ryan, with possibly the most Ryan thing ever said.

Overall: I talked a few weeks ago about my fears concerning all the relationship plate-spinning the writers were about to do. Last week’s outstanding episode side-stepped that issue, but this week’s show jumped in with both feet.  I think my fears weren’t entirely unfounded, as the Jim/Kathy and Val/Daryl portions seemed especially forced.  However, the underlying comedy was so strong as to overcome these problems and produce another very good episode.  Ryan and Dwight made me laugh the hardest, but Jim, Kelly, Andy, and even Catherine Tate’s character all had some great moments.  Not quite as strong as last week’s stellar show, but still excellent.

Good Stuff: Archer announcing whenever he’s using sarcasm . . . Archer agreeing to help Ray because the scenario is similar to the plot ofWhite Lightning (starring Burt Reynolds) . . . “Hey, y’all! Here’s my great big ol’ black wife!” . . . “Yeah, I usually put my feet up on the grab bars” . . . I enjoyed Jack McBrayer’s performance . . . “Plus, I’d rather kill myself! Nothing up there but a bunch of you-know-whats!” . . . “(*sound of rooster neck snapping*) I’ll cook it! If someone shaves it or whatever” . . . “Even though Ray used to be a preacher, he was never big on the Old Testament.” “Uh…I could see that” . . .“Pfft…yeah, and I’m…fuh…something…equally hard to believe…is true!” . . . “I’m pretty furious about not getting to bang Janelle. Plus, I want to unleash the power of moonshine!” . . . “It’s my bum zappers. For the shock fights?” . . . “Since I ate your husband…Dan Lather.”

Non-good Stuff: The car animation still looks weird to me . . . the sheriff turning out to be gay at the end was a little cliched.

Line of the Night: “Don’t judge me…food!” – Archer, to a judgmental chicken.

Overall: There wasn’t much not to like.  I realized in watching this episode that Lana might actually be my least-favorite character.  She’s perpetually cranky and actually a bully (in a sometimes unfunny way) in many instances.  Anyway, having her out of the mix on this one was actually a nice change of pace, and Ray is usually strong.  The only problem I had with this episode was that the laugh lines didn’t hit me as hard as the ones on 30 Rock or the Office did tonight.  So, while there weren’t any real complaints about this episode, there also weren’t any moments that I enjoyed as much as I did during the other shows. That’s not much of a complaint, though. 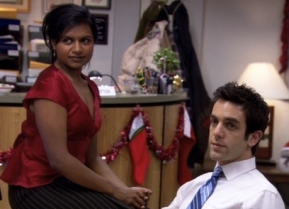 Final Thoughts: The Office had a higher degree of self-imposed difficulty by tackling some of the relationship storylines it set up previously.  It still managed to produce the most laugh-filled half-hour.  The lows on Archer weren’t as low as those on 30 Rock, but the highs on 30 Rock bested Archer’s top moments.  The Office was easily the best of the three in my view, however.  This has been a strong run for the Office, and keeping the momentum going as we approach the season finale of the first year without Michael Scott will be key.  The curiosity factor (to the extent it even existed in the first place) will be completely gone by next year.  There’s also the issue of what actors will have their contracts extended or be willing to have them extended, not to mention the overall health of the series as a whole.  Continuing to provide episodes like we’ve seen recently will help solidify the short-term future of the show.