As our cultural integrity continues to buckle under the weight of exploitative “reality” programming and mindless pseudo-documentaries, it’s difficult to recall that MTV (f/k/a Music Television) was once the arbiter of success in the popular music industry. 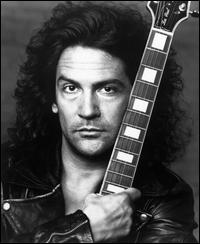 It isn’t merely the case that heavy rotation on MTV could enhance an artist’s career (especially ones who were visually appealing).  MTV also had the ability to shine an unwelcome light on otherwise competent musicians who had faces made for radio.  One-time Academy Award-winner and five-time Grammy-winner Christopher Cross is the quintessential example of a previously successful performer whose career suddenly cooled off and eventually deteriorated into obscurity thanks to the new visual component of the business.

The formula that determined an act’s commercial and popular potential had always included a variable accounting for personal attractiveness or style.  That wasn’t a creation of cable television.  Rather, the world-changing innovation provided by MTV was to affix a massive multiplier to that variable.

In its early incarnation, MTV was an all-powerful prism in which career trajectories could be altered for ill or for good as they passed through the channel’s airwaves.

This is the story of one career that did both.

Billy Squier was a gifted purveyor of a musical sub-genre known as “arena rock” that is as foreign to modern audiences as Squier himself.  After having built a reputation within the business as a guitarist for a series of different bands in the 1970’s, Squier decided to try to make it on his own.  He coupled his six-string talents with a vocal style well-suited for hard rock of that era.  The prerequisites for an auspicious start to Squier’s days as a solo act seemed to be in place.

Yet, his debut album, The Tale of the Tape, peaked at #169 on the U. S. charts.  Not a disaster by any means, but certainly not a huge hit.  It’s worth noting that Squier released the album in 1980, prior to the advent of Music Television.  Despite the so-so performance of the album, Squier’s crossover appeal was undeniable, as he combined contemporary hard rock with a few pop elements that broadened his audience.  All he needed was a catalyst.  MTV served that purpose.

His second album, 1981’s Don’t Say No, shot to #5 on the Billboard album chart thanks in no small measure to a series of very popular videos that ran regularly on the fledgling cable music channel.  The first of these was for a song called “The Stroke”[1], which pulled off the somewhat rare feat of cracking the Top 20 on the overall (pop) singles chart despite being a hard rock song.  “The Stroke” also made it to #3 on the mainstream rock chart.

Follow-up singles “Into the Dark,” “Lonely is the Night,” and “My Kinda Lover” were each hits in their own right, coinciding with the emergence of Squier as an early MTV favorite.

His next album, Emotions in Motion, continued Squier’s ascent and even surpassed Don’t Say No.  The initial single, “Everybody Wants You” was Squier’s first #1 hit, attaining the top position on the mainstream rock chart in 1982.  Four more hit singles from Emotions in Motion followed, as did a double-platinum certification for the album.  Billy Squier had cemented himself as a star in the world of arena rock.  He perhaps was poised to be its biggest star.

It was not to be.  And he would be destroyed by the same instrumentality that helped elevate him in the first place.

After consecutive platinum albums that reached the Top Five, the release of Signs of Life in 1984 came with understandably high expectations.  The fist single off the album was a song called “Rock Me Tonite.”

The track was a logical continuation of the musical path that Squier had forged since his first album.  Combining some synth-heavy pop hooks with a few rock guitar riffs and percussion, the song was very much within the parameters of a single that a Billy Squier fan might have expected to hear in 1984, albeit trending more toward the “pop” end of the spectrum.  “Rock Me Tonite” sold well, becoming Squier’s second rock chart-topper.

So, then, why is this single considered by most—including Squier himself—to be the death knell of his career as a top-level popular act?  Why is this an awkward moment in entertainment history at all?

The above clip was criticized as not only an objectively bad video, but also a particularly horrible choice given the nature of Squier’s fanbase.  Effeminately cavorting about and/or crawling around on the floor in what appears to be aerobic gear (including, at one point, a pink tank top) was a damaging blow from which Squier would never fully recover.  Concert attendance took an immediate hit, and Squier would eventually fire his managers as a result of the fallout from the “Rock Me Tonite” debacle.  He maintains to this day that the director misled him about the concept for the video.

Pause here for a moment to consider just how profoundly awful and misguided a video had to be to generate that level of negative backlash from audiences and critics in 1984.

A careful examination of a lot of Squier’s previous work shows that his dance moves didn’t change all that much between “The Stroke” and “Rock Me Tonite.”  The difference was that he could get away with some of those gesticulations performing onstage with a band, or, even better, with a guitar in front of him.  Once he took it to the level of actually getting on all fours, or rolling around in pastel-colored satin sheets, that was a bridge way too far.

The unfiltered version of his dancing accompanied by strange choices of facial expressions and attire proved to be unsettling for most of Squier’s following.  In the 2011 book I Want My MTV, authors Rob Tannenbaum and Craig Marks interviewed hundreds of musicians, journalists, and former MTV employees about the early days of Music Television.  Anentire chapter of the book was devoted to “Rock Me Tonite,” which was hailed universally by the interviewees as the worst video ever, particularly as a business misstep.  The consensus was that it made him look flaming at best[2] or as if he were on drugs at worst.

The album proved to be his third straight to go platinum, but didn’t move as many copies as his previous effort.  It also failed to crack the Top Ten on the album chart.  Needless to say, Signs of Life is Squier’s last platinum album to date.

Squier released three more albums between 1986 and 1991.  Despite shifting back toward a more rock-styled sound, each of those albums charted at a worse position than the last.  1993’s Tell the Truth became the first Squier album not to chart at all.  Happy Blue proved to be Squier’s final studio album.  Like its predecessor five years earlier, it failed to chart.

If there’s any consolation to be had, it’s that arena rock itself sharply declined in popularity only a few years after Squier did personally.  So, it might be said that “Rock Me Tonite” merely accelerated an inevitable end, rather than creating it outright.

Billy Squier turned out to be something of a Lonesome Rhodes for the MTV generation, with a meteoric rise facilitated by television followed by a speedy downfall as a result of a few moments of ill-advised content.  Unlike Rhodes, however, Squier was the genuine article sadly undone by a public misperception, and not the other way around.

3 Responses to Awkward Moments in Entertainment History: Rock Me Tonite