The Office has hit an unexpected stride with a bifurcated workforce.  The NBC demographic powerhouse has won two consecutive weeks despite the fact that half of the employees of the titular place of business have been in Tallahassee.  The show even managed to assuage my fears of a turn for the soap-y by nailing an A-minus last week in an episode that incorporated a lot of personal relationship storylines.

Meanwhile, 30 Rock has been stumbling just a bit.  These certainly haven’t been bad shows by any means.  Just not good enough to topple Archer and the Office.  Even shows a half-notch below the lofty standards set by what has been the best comedy on television over the last five years still make for great TV more weeks than not.

Archer hasn’t won recently, but the wacky cartoon comedy always seems to be lurking. Will this be the week that ISIS gets back on top?  Let’s find out.  This was SitCombat for March 1, 2012:

Tonight’s Episode: Frank convinces his mom that he’s dating Liz, Jack tries to mentor Kenneth in the ways of business, and Jenna and Tracy use Jenna’s experience from a crime drama pilot to solve a workplace mystery.

Non-good Stuff: Unless they could have found a way to shoehorn in Grizz and Dot Com (or Cerie), I don’t think this episode could have gotten any better.

Line of the Night (there were about ten, but I’ll pick one):

LIZ (to Frank): I can’t be your girlfriend because I’m not an old pedophile.
LYNN (from under a desk): We prefer the term “adultophobe.”

Overall: Joke-for-joke, this is as good as any episode of 30 Rock I can remember, and that’s saying a lot.  All three storylines worked, and I think one of the reasons is that the pairing of the two main characters for each (Liz/Frank, Kenneth/Jack, Jenna/Tracy) was a good fit.  The best way I can sum up this episode is as follows: 30 Rock is known for the frenetic pace of bits and lines in the cold open and, often, the beginning of the first act.  This episode somehow kept up that insane pace for an entire show.  Best episode of the season so far, and one of the best ever in the show’s run.  As a sidebar, I wonder if they’re setting up Kenneth to take Jack’s place if and when Alec Baldwin leaves the show.  We seem to be headed in that direction.

Tonight’s Episode: The Sabre test store opens, and Andy gets beaten up(?) by a fifth-grader(?!?).

Non-good Stuff: Andy getting beaten up by a gang of little girls on bikes was dumb . . . Also, I don’t think a shiner like that is going to form during the two minutes it takes to get from the parking lot to the office . . . The ending seemed strangely abrupt . . . “Sign-spinner” is a job at which I wouldn’t WANT to get good.

Line of the Night: “How about we wait ‘til next year when YOU have YOUR kid?” – Pam, to the fifth-grade female bully.

Overall: The problem with the Scranton story was that they strayed too far away from reality, even for a zany sitcom.  There’s a fine line between “wacky” (which is fine) and “implausible,” which is what happened with the home plot.  It felt like they had to workvery hard to get to a “Toby teaches self-defense in the office” bit.  The Scranton stuff was fine once we got there, but getting there was awkward.  The away plot, on the other hand, was strong once again.  Dwight getting the VP gig might set the stage for more changes to the show.  Or, perhaps more likely, a tease that leads to a return to the status quo by the end of the year, with Packer staying in Tallahassee.  Another good effort, although there’s been a mild drop-off the last couple of weeks.

Tonight’s Episode: Archer and Pam start a secret affair, while Jakov defects with Barry in pursuit.

Non-good Stuff: Cyrill is just terrible sometimes . . . I feel like they work in external car shots now just to show off the budget, but it still looks a little weird and out-of-place with the rest of the animation style used by the show

Line of the Night: “You make me sound like some kind of chupacabra . . . but for d**ks.” – Pam, accurately describing her relations with Archer.

Overall: Great episode.  The Pam/Archer thing was set up in such a way that it made sense, and the return of Barry was a nice surprise.  Barry is the perfect foil for Archer, and his involvement usually raises the level of the show.  This was no exception.  There wasn’t much not to like.  Everyone had some good moments (except Cyrill) and Barry and Pam stole the show at various points.  This looks like the beginning of a multi-episode arc that will have Archer facing off against Barry once again (with predictable, but hilarious results), and possibly getting to the bottom of his mysterious parentage. 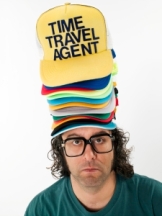 Final Thoughts: Tough break for Archer this week.  This was an episode that was probably one of the two best this year, but it went up against THE best 30 Rock episode of the season in my estimation.  The Office was also good, but took the imaginary bronze despite a B-plus effort.  This was one of those weeks when everybody won, because even the third-place show was quite good.  30 Rock prevails on the strength of an episode that I believe is among the finest ever written.