30 Rock barely held on to defeat Archer last week, despite the fact that the former was airing its final episode.  With a major hurdle out of the way, Archer may begin to dominate SitCombat for the remainder of its season. 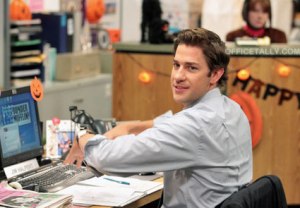 That is, if the last three episodes of The Office are any indication.

The venerable NBC sitcom has taken an odd turn of late, throwing a “Hail Mary” in its final year with an unexpected (and, from my perspective, unwelcome) storyline about a boom operator falling for Pam.

I’ve tried to stay positive about all the shows I’ve reviewed for SitCombat.  The Office is in uncharted territory now, though.  We’ll see if they right the ship, or did themselves a deeper hole (or mix metaphors).

Non-good Stuff: No cold open, huh?  Ok . . . The story from Pete about the family dog that had to be “sent to a farm” is a nice metaphor for this suddenly tedious show . . . Let’s pause here to consider that Jim just said, “Pam and I have gotten really close to he and his wife Alyssa over the years.”  First off, it’s “him,” not “he.”  More importantly, they are doing exactly what I feared they would: Retconning the show to create some long-standing relationship or romantic tension.  With all due respect, The Office, go f*** yourself . . . This is the second time in a handful of episodes that Clark has been enlisted to participate in a ruse of a relationship (previously father/son), the person who asked him to do so has mocked him, and he has tried to undermine the ruse.  I mean, that JUST happened like three episodes ago . . . What a shocker! Brian’s wife isn’t at the restaurant!  And they’re splitting up!  I’m just stunned.  Who could have seen this coming?!? . . . I like that Andy doesn’t come to work for months, yet immediately begins criticizing the work ethic in the office when he returns.  Makes perfect sense . . . What’s the point of making Andy into a huge heel at this late stage of the series?  Better question: Why spend years building Andy up as a lovable loser, sometimes almost being too similar to Michael Scott, only to have him not only wind up as a total jerk, but also completely terrible at his job?  And greedy to boot?  Just another awful decision.  If Ed Helms has movie commitments, fine.  There are a hundred ways to write him off the show. Doing it this way is simply bonkers . . . Nothing gets laughs like a wife keeping things from her semi-absentee husband . . . “I don’t know, Pam. I guess I just feel like a chump.”  This is comedy writing!!!

Overall: I liked this show better when it was a sitcom.  It’s not even a rom-com at this point.  It’s an anthology on people who are varying degrees of distasteful who happen to be going through relationship struggles.  Dwight Schrute seems like he’s a character from an entirely different show.  My only hope is that this puts an end to the Brian storyline, and that Andy is gone after one more episode (or at least demoted).

Tonight’s Episode: Archer is stranded in Montreal and gets help from an unexpected ally.

Non-good Stuff: The cuts to the more “computer-heavy” animation is always a little jarring, and there was a lot of it in this episode.

Overall: Great episode.  I was worried that a Ron-centric show might cause problems, but Ron Liebman is a pro.  The Archer / Ron dynamic was a nice change-of-pace, as Archer either has no respect for / hates everyone (see, e.g., the response to his request for help early in the episode) or has a child-like hero worship (e.g. Burt Reynolds or Lucas Troy). He and Ron actually had a real, fun dynamic.  Aside from the action and plotting, there were the usual laugh lines. I especially liked “C. W. McCallGirl,” among several good ones.  I feel like Mallory seeing Ron and Archer acting friendly probably spells doom for Ron down the road.  We’ll see.

Final Thoughts: The Office needs to go off to a farm in the country.  I hinted at this last time, but I want the show to go all-out now.  Just do everything possible to incense fans.  Have Pam cheat on Jim with Brian.  Kill off the Dwight character.  Have Oscar turn straight after being hit on the head by a frying pan.  Allow the series to end with an unsatisfying cliffhanger or totally implausible conclusion (halfway there!).  If things don’t rally in a major way over the last few episodes of this show, I hope that fans can remember the show as it was, not as it ended.  On the other side, Archer was terrific tonight.  The episode struck a nice balance between story and funny bits, which is something that the writers of the FX comedy normally do very well.  Tonight was no exception.  There was even a little self-reflection from Archer.  I’m excited about the rest of this season, even though I’m now convinced Ron will meet a gruesome end since Mallory knows Archer approves of him.  I’m not saying she’ll KILL him.  I’m merely saying she won’t be in any rush to STOP him from being killed should he find himself in harm’s way.  Anyhow, tonight wasn’t even remotely close.  I need to go watch an episode of It’s Always Sunny in Philadelphia to get this bad Office aftertaste out of my mouth.