A Subtle Lesson of the Woolwich Attack 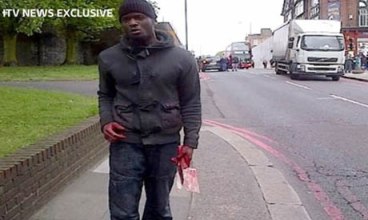 By now, everyone has likely heard the awful story of the brutal attack perpetrated in the London district of Woolwich yesterday.  To recap, two “suspects”[1] attempted to run a man down with their car, then, after crashing their vehicle, attacked the man with knives and a machete.  They eventually beheaded the man, reportedly a British soldier.

After doing so, one of the men issued a statement of sorts to a nearby camera.

It was something the man said that struck me as the most profound element of this entire sad, grisly saga.  Here was his quote, in full:

We swear by Almighty Allah we will never stop fighting you. The only reasons we have done this is because Muslims are dying every day.  This British soldier is an eye for an eye a tooth for tooth.  We apologize that women had to see this today, but, in our lands, our women have to see the same.  You people will never be safe.  Remove your government. They don’t care about you.

The fact that a vague threat is made isn’t remarkable.

The fact that he cites an antiquated legal principle isn’t remarkable.

The fact that he invokes religious fervor as a motive, sadly, isn’t remarkable.

No, all of these are to be expected, given the facts of the case.

Yesterday’s attack appears to have been perpetrated by a British citizen of Nigerian descent who only converted to Islam in his 20s.  The attack resembled other plots in certain respects, including one bombing plan from earlier this year formulated by three British-born Muslims.

It’s easy to take this for granted, but Americans largely still embrace the idea of the “melting pot.”  We accept the premise that absorbing and assimilating foreign cultures into our own makes us a stronger, better nation.

As a result, and to cite just one example, our Muslim-American population is less radicalized than those in other nations.  Furthermore, American Muslims have been integrated economically into American culture far better than the Muslim population of any other major Western nation.

PEW RESEARCH – Data consistently suggests that American Muslims have become part of our society in a more complete way than other western nations, overall.

The more unbalanced versions of multiculturalism eventually (and inevitably) find themselves at odds with concepts like the melting pot.  Britain chose to embrace the former path, permitting elements of theocratic Islam to exist in tandem with British institutions.  For example, Sharia law courts that are recognized as separate and equal sources of legal adjudication over certain matters that were formerly the exclusive province of the secular, state-run court system.[2]

Whether this attitude is the result of naive but well-intentioned liberalism, or whether it is more the result of fear and appeasement, it has helped shape the UK into a nation in which even the native-born Muslim population sees itself overwhelmingly as adherents to a higher “nation” first, and British citizens second.

I need to be clear on this point: I am in no way saying that the United Kingdom “brought this upon itself.”  Absolutely not.  These criminals are monsters, and nothing justifies what they did today.  What I am saying is that the United States has a unique ability to bring new populations into the proverbial fold within a generation or so, if not nearly instantly.

That is why, as an American, it is so odd to me to see a man who could very well be English-born, speaking English with a mostly-English accent, while standing on English soil and making reference to some other land as “ours.”

To be sure, the United States has outliers who perpetrate hate crimes against Muslims, just as we have outlier immigrants or first-generation Americans who don’t assimilate and who also see themselves as foreign first and American second.  However, those are the rare exceptions that are far less-rare in many other nations.

In the United States, although our record is obviously imperfect, propositions such as “anyone can become an American,” and “we’re a nation of immigrants” are woven into the fabric of our national identity.

It’s much tougher for someone to convince you to engage in anti-American activity when you feel you are, in every sense, an American.

When we speak of American Exceptionalism, those of us who still believe in such a concept point to E pluribus unum as an underpinning of that idea.  The bargain is a simple one: An immigrant may become fully American in a way that he may never be able to become fully French or fully Russian or fully Dutch.

There really isn’t a catch, either, except that the new American accept our laws and certain very basic cultural norms.  The paradox is that those cultural norms are based largely around individual freedom or self-determination, which means “embracing” them might mean only “live and let live.”

Do that, and everything our nation has to offer can become as available to the immigrant and children of immigrants as it is to me.  I look—with pride—at a new citizen as every bit a “real” American as I am.

That is our magic.

That is what makes us great.

That is American Exceptionalism.

That is also why we must always preserve that value.  It is the mechanism by which a nation of immigrants remains a nation, rather than a litany of bickering factions segregated by blood or holy book.

Every American must believe that this is our land.  All of us.  Whether we were born citizens or not.  Whether we’ve been here for generations or months.  Whether we worship the same god, a different god, or no god.

Everyone must remain invested in our nation’s culture and her well-being.  The way to make sure this happens is to stress shared values and opportunity, not highlight differences in an attempt to divide us into aggrieved categories.

We’ve done a better job of that than Europe has, and I think our culture has benefited greatly as a result.  I can only hope that we continue to do so.  But protecting those values, like protecting most things that matter, will take work.

By every one of us.

In word and deed.

For the rest of our lives.

[1] I think when the “suspects” loiter for 20 minutes to dance around the corpse, have their picture taken by onlookers, and confront the police, we no longer have to refer to them as “suspects.”

[2] Don’t mistake me for one of the rather extreme folks who believes that we need to pass laws to “outlaw Sharia.”  That seems absurd to me.  And the fact that that idea is so absurd to an American, I think, reflects just how different we are in certain respects from our European cousins.

4 Responses to A Subtle Lesson of the Woolwich Attack