The first of the films in the Warner Bros 50 Film Collection is Grand Hotel.  Grand Hotel won the Academy Award for Best Picture for 1932.  As a quirky bit of trivia, this is the one and only film in movie history that won Best Picture but received no other nominations for itself or its cast and crew. 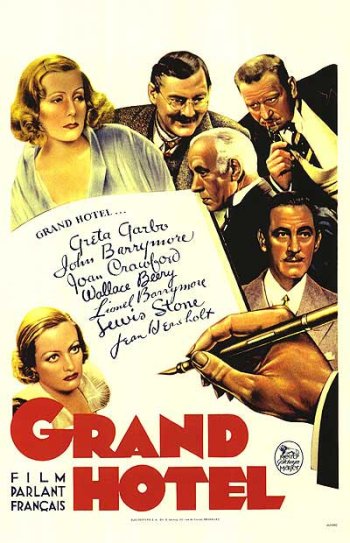 The premise of the movie is simple and clean: The plot revolves around the activity inside an expensive hotel in Berlin, following the lives of the various guests who happen to be staying at the Grand Hotel at the time.

Grand Hotel largely is both.  It’s easy to see the contemporary quality of Grand Hotel, and some of the sets are impressive even today, particularly the lobby scenes.

Overall, though, the movie still hasn’t aged well.  The acting is incredibly melodramatic by 21st-century (or even post-1970s) standards.  Most of the performances lack any semblance of the authenticity that the performances in a movie produced in the last 50 years would have.

Nonetheless, the plot actually works surprisingly well as the movie unfolds.  There’s some complexity there that surprised me.  Also surprising was an abrupt left turn the movie makes near the end, where one character is suddenly and semi-accidentally killed by another.

Grand Hotel is also one of, if not the first films to follow the lives and stories of unrelated characters, some of whom intersect at various points in the movie.  My understanding is that that key feature is what makes Grand Hotel historically significant.

As I referenced a moment ago, the biggest problem with this movie is the acting style.  The performances are usually far too “big.”  I would go as far as to say that the only two actors in the cast who seem like they could still act in a modern film (or at least whose styles would work in a movie produced during my lifetime) are John Barrymore and Joan Crawford.  Quick sidebar: For anyone who is only familiar with Crawford’s later, What Ever Happened to Baby Jane-Era work, trust me when I say the 1932 version of Crawford is both excellent and gorgeous.

Contrast that to Greta Garbo.  Admittedly beautiful, Garbo is not only a particularly bad actress, but her accent is incomprehensible at times.  Yet, she was considered perhaps the biggest female star in the world at the time Grand Hotel was released.  Someone watching Grand Hotel for the first time in 2014 might be mystified as to why.

It’s not a terrible movie.  It’s just very dated.  Anyone who cares a lot about movie history should definitely watch it, and Grand Hotel deserves credit for pioneering some storytelling techniques that would become commonplace later.