After the bad taste in my mouth left by the subject of my last untimely review, I had rather high hopes for North by Northwest. 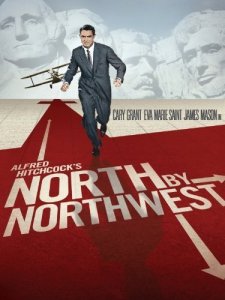 North by Northwest is like a James Bond film, except if James Bond were a nondescript advertising executive who, after a series of misunderstandings, accidentally and against his wishes becomes a de facto secret agent.

First and foremost, Cary Grant is a Movie Star.  Capital M.  Capital S.  That matters, especially for films from this era.  He commands attention onscreen, whether by overt humor, as a leading man, or with quiet intensity in an action or suspense sequence.

But what cements North by Northwest a great movie is Alfred Hitchcock’s direction and creative choices.

Every movie fan knows about the iconic scenes in North by Northwest involving a perilous confrontation with a crop-duster, or the tussle atop Mount Rushmore, but Hitchcock’s true excellence is in the little touches.  As fun and as “big” as those scenes are, the small ones in-between make the movie.  Everything from the frenetic, stylish opening credits, to the overhead matte-painting shot of Grant’s Thornhill getting into a cab, to the dining car scene between Grant and Eva Marie Saint, every tiny moment and subtle choice crafted by Hitchcock adds layers of both style and substance to North by Northwest.

Possibly my favorite example is the very tense scene that immediately precedes the famous plane encounter.  Grant arrives at a bus stop in the middle of nowhere, surrounded by nothing but crops.  Every car that passes by is a potential revelation or a potential fatal danger.  Eventually, a man shows up and Grant reluctantly speaks with him, trying to ascertain who he is and for whom he’s working.

Everything about that scene clicks, and what makes it so impressive is that what’s actually taking place onscreen should, in theory, be uneventful, boring, or even relaxing.  But Hitchcock has successfully shifted audience expectations such that what would be mundane if decontextualized becomes rightfully riveting in his capable hands.

The movie isn’t perfect.  There are a couple of implausible moments (even by the relaxed standards of the film) that are used to keep the plot moving.  The conclusion of the scene at the UN, which ends with a knife in the back, is particularly silly.

Ultimately, though, you get deadly airplanes, shootings, drunken car chases, hand-to-hand combat on top of Mount Rushmore, a creative and hilarious escape via an auction house, intrigue aboard a train, and innuendo.  What more could you reasonably ask for in a thriller?

Not much.  North by Northwest is a tight, exciting, very fast-paced film that hits the mark.