Distortion for the Greater Good

It’s as fascinating as it is frustrating to watch the media spin a story to suit its preferred narrative.

Our weekly example comes from the controversy surrounding oral arguments in Fisher v. University of Texas, the latest affirmative action case to reach the Supreme Court of the United States.

An MSNBC reporter named Irin Carmon—who also co-authored a laudatory biography of Justice Ruth Bader Ginsburg entitled The Notorious RBG—seized on a question raised by Justice Antonin Scalia during oral arguments. The question dealt with the assertion (raised by one of the briefs) that promising students from disadvantaged backgrounds might be better served by attending good-but-non-prestigious colleges, rather than attending elite schools via affirmative action programs.

In other words, this theory goes, students can face a more daunting adjustment than either they or the colleges realize, unnecessarily dooming them to failure at elite schools when they would likely have prospered at other schools.  There has been legitimate research into this idea that dates back over a decade.

That context was absent from a tweet Carmon sent out, and the response via social media has been sadly unsurprising:

From transcript, what Scalia said today on whether black people would be better served at “less advanced” schools pic.twitter.com/ikYGnjqM5p 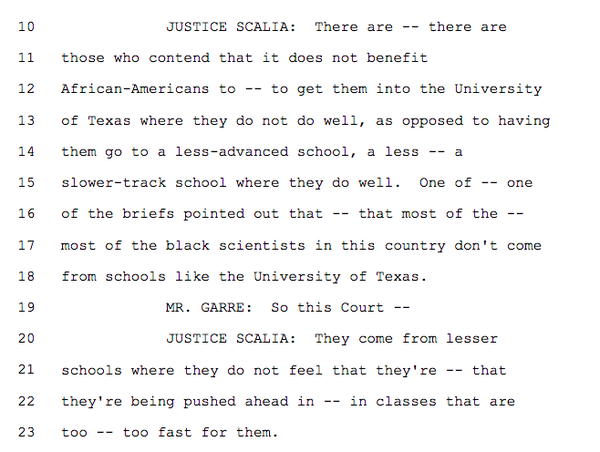 As for that response, you know the drill by now.  Scalia’s a racist.  Scalia should be impeached.  Scalia kicks puppies.

Predictably, many left-leaning outlets then ran with the story. Within a few hours of Carmon’s tweet, journalists—either out of ignorance or disingenuousness—had pounced:

These are simply lies.

But lies are acceptable when they are told in furtherance of the “correct” worldview.

I have no idea whether the theory presented in the brief is entirely sound.  The notion of racism here presumes that the conclusions of the research must be per se racist, and that question is beyond the scope of this piece.  I also don’t know enough about this specific case to know if the research could even possibly have legal significance either way.

What I do know is that it is wholly unremarkable—indeed, wholly proper—for a justice to ask about arguments presented in briefs at oral argument if he deems them potentially relevant.  It’s also worth noting that a justice who asks such a question doesn’t even necessarily agree with the premise.

But none of that matters.  Here was a chance to (again) paint Scalia as a backwards bigot by presenting a question he asked as a position he held, and doing so without the context of the research behind it.

Other outlets took the story even further.  Huffington Post, for example, cited Scalia’s “troubling” comments while approvingly reporting on the #StayMadAbby hashtag, a taunt directed by some University of Texas grads at Abigail Fisher, the plaintiff in case.

If there’s another example of an outlet like HuffPo applauding the mockery of a young, female plaintiff whose civil-rights-related case is before the Supreme Court, I’d love to see it.

That example doesn’t exist, naturally.  Because these outlets are wildly hypocritical.  The rules of what is acceptable change the moment someone has “wrong” views.

But back to Scalia.  When the story of his comments filters through a television newscast, expect only a crumbling, unrecognizable husk of the truth to remain, further diminishing the general public’s understanding of how the Court should work and does work.

For many in the media, the chance to stick it to one of the “bad people” and to portray the disfavored side of a legal argument as obviously racist is more important than silly, outdated concepts like nuanced discussion or basic fairness.

Thus, we get articles like this one from The Daily Beast.  A mostly reasonable discussion of Scalia’s early school days is bookended by (1) “Scalia couldn’t get into good schools!!!” and (2) “Scalia is the Donald Trump of the Supreme Court!!!”

Here’s the heart of the matter: The media sees which way the wind is blowing in Fisher, most of them disagree with the direction of this particular breeze, and, thus, they preemptively shift the conversation to “the majority, especially Scalia, is racist.”

It is intellectually dishonest at best.  Unethical at worst.

If there’s a silver lining: Scalia cares not a whit.

A partial version of this piece published at Ricochet on December 9, 2015