We have an abbreviated edition of SitCombat this week, as NBC pulled a fast one, showing six consecutive episodes of the Office. All were reruns.

So, while I would normally review all three series, even if only some were airing first-run episodes, the fact that 30 Rock didn’t air at all, while I have six episodes of the Office from which to choose, places a very large asterisk beside this week’s edition.

With that in mind, I’ll pick one episode of the Office at random to go up against the all-new Archer:

Tonight’s Episode: Andy performs in a local production of “Sweeney Todd,” and the gang turns out to check out the spectacle.

Good Stuff: “Did you write this?!?” . . . Dwight taking the knife out to defend himself from the Sweeney Todd cast . . . “The last time I went to the theater, a man dressed as a cat sat on my lap” . . . Jim and Pam trying not to sit next to Michael . . . Ryan not only bringing an iPad to the play, but also using it as his sole means of telling time—in analog, no less! . . . Creed dictating a review of the play . . . Michael booing . . . Michael’s audition.

Non-good Stuff: Andy checking his e-mail offstage. Come on, man. Pathetic, but not funny-pathetic . . . Dwight and Angela. Not sure what to make of that whole storyline. And I can’t even remember if (or how) it was ultimately resolved . . . Andy’s post-show depression.

Overall: This one had some high highs, but there were also some significant dead spots. The biggest problem I have with The Office at times is the writers’ desire to elicit an emotional response in the audience that skews too close to drama. I guess that’s just a matter of taste, but I would contrast The Office with a show like 30 Rock. In the latter, we still care about the characters without having to be beaten about the ears with maudlin moments of human emotion. The last montage in this episode reminded me of something you might see at the end of an episode of The Shield, where the audience sees the aftermath / reactions of the various emotional conditions of the key participants in that evening’s episode. They didn’t overshoot the mark by too much, but landing too far on the “drama” side on occasion still isn’t a plus. Other than the funny musical elements and execution, I didn’t think this was one of the better shows of the season. It seems like there’s a fairly strong correlation between keeping things in-house at DM and quality of the show. The episodes where there’s a “wacky” premise often, but not always, are better in principle than in practice.

GRADE: B-minus (but with a “rerun deduction,” it becomes a C-plus)

Line of the Night: N/A

Tonight’s Episode: Cyril tries to show the other members of ISIS that he’s a valuable member of the team after all.

Non-good Stuff: Cyril’s unredeemable gullibility . . . They say “Ya THINK?!?” far too often on this show . . . Archer sometimes crosses the “Kenny Powers” line between “funny egomaniac” and “too unlikable”

Overall: Was it funny? Yes. Was there a coherent plot? Yes. Was there a good villain, and even a great action scene? Yes. Was there any sign of Wee Baby Seamus? No! This one hits all the marks with few weaknesses. A good contemporary sensibility without being too weird (as a couple of recent episodes have been), the spy movie parody element was there, and there were some great lines. My only complaint is that Lana and Mallory didn’t have much to do this week, but, on the other hand, it was a Cyril-centric show. This was one of the two best episodes so far in Season Two, if not the best. I can’t find much wrong with this one.

Final Thoughts: Archer wins the night almost by default, but that does this edition a disservice.  It would have taken a top-notch effort from either of 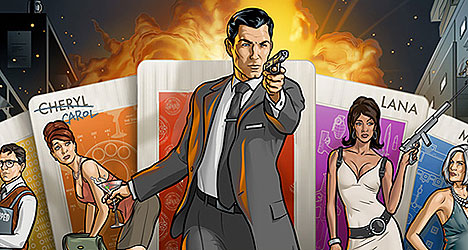 the NBC shows to topple this particular episode. It seems like Archer got back to basics this week, hitting on the cylinders that made Season One so enjoyable. Here’s hoping they can keep the momentum going next week.