It’s all too easy to dismiss professional wrestling as a mongrel form of entertainment that achieves neither the excitement of legitimate competition nor the imagination of true performance art. 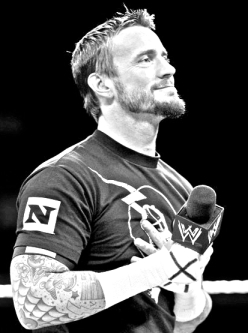 Yet, I’ve always thought those who try to pigeonhole the endeavor as either a fake sport or amateurish acting miss the point entirely.  It is that unique combination of athleticism and scripted drama that gives wrestling its singular* appeal for those of us who choose to see that particular glass as half-full, rather than judging professional wrestling for what it isn’t.

I find it fascinating from a sociological perspective, never moreso than when the sport becomes self-aware of its own peculiar conventions.  This is a delicate balancing act.  Being able simultaneously to maintain the beats of a well-crafted wrestling angle while also injecting a dose of the external reality that underscores the multi-layered nature of the sport without having that reality collapse on itself requires a skilled writing staff and, more to the point, a gifted performer.

Only a handful of wrestlers in the last twenty years or so** have had the necessary attributes to succeed with this kind of material.   This is not something to be taken lightly.  In the wrong hands, such a storyline doesn’t merely fail to “get over,” it actually undermines the product.

The much-talked-about promo cut by Punk on this week’s Monday Night Raw deserves all the acclaim heaped upon it in the past 48 hours.  It ups the ante in what was already shaping up to be one of the most memorable months in recent sports entertainment history – perhaps the most memorable not connected to one of the “Big Four” pay-per-views.

I’m not sure how much longer the WWE will allow these videos to remain online.  Keeping with storyline would require they police / remove clips like this one.  Until that happens, however:

The latter portion of his rant has attracted the most attention because it crosses imaginary lines in ways not seen in more than a decade.  Punk criticized with specificity the company itself, targeting individuals who are normally off-limits on television.  This included the heirs apparent to the WWE empire, characterized by Punk as “idiotic” and a “doofus,” respectively.  What intrigues me even more, however, is his primary (and first) assertion.

It’s a war against an idea.

Namely, the idea that John Cena is the best in the world – an idea propagated and fostered by Vince McMahon and the WWE corporate machine, flying in the face of Punk’s singular reality: That he, in fact, is the greatest wrestler in the world.

This subtle difference may not mean much to non-fans, but this slight deviation from the standard formula adds compelling sophistication for those who appreciate the art form – and Punk’s significant contribution to that art form.

**Before that time, breaking kayfabe would have been almost be unimaginable.

8 Responses to The Artisan