Portrait of a Cereal Killer

My “normal” eating habits properly may be called neither “great” nor “terrible.” I certainly overeat on occasion.  I also rarely eat a lot of sugar.   I don’t eat as many 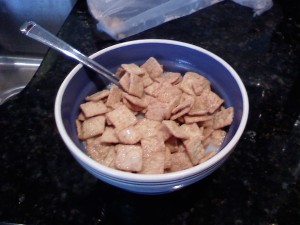 vegetables as I should.  I do make a point of eating fresh fruit every day.  The only cereal I eat is Cheerios.  Not honey-nut, not frosted, not apple cinnamon.  Plain, old Cheerios.  The kind you would feed a toddler.

Each of the above guidelines evaporate upon my arrival in Chicago for my annual summer vacation. I go there to visit my best friend, his wife, and their young son[1]. My dietary patterns during that particular week could best be described as “borderline-suicidal.”

Perhaps in an effort to ward off future transgressions through record-keeping, or maybe just to fill up space within these virtual pages, I decided to keep a log of the regrettable cuisine choices I made during my time in the Second City.

Saturday: I arrived in the early evening, which meant two things: (1) There was only one meal remaining in the day, and (2) there wasn’t time to make the obligatory trip to the grocery story to stock up on saturated fats and high-fructose corn syrup. Therefore, I had only a turkey club sandwich and potato chips at Jimmy John’s. To be fair, I ate half of a leftover large pizza from Papa John’s and a hefty slice of pound cake earlier in the day before even setting foot on the plane.  So, there’s that. 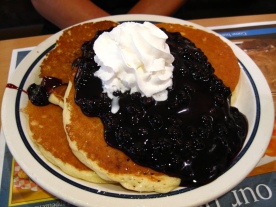 Never is the line between "entree" and "dessert" more blurry than at the International House of Pancakes (Pastry?)

Sunday: Since we hadn’t stocked up at the store, we were “forced” to go out for breakfast.  I enjoyed a blueberry pancake platter at IHOP.  This included four blueberry pancakes with blueberry goo[2] and whipped cream on top, as well as a healthy[3] soaking of maple syrup.  We made our necessary trip to the grocery store on the way home from IHOP.  More on this later.  Since I hadn’t seen a movie in a theater since 2009, my buddy and I decided to go see Super 8[4].  That led to my purchase of a large popcorn with butter and a large Coke.  This is significant because I don’t think genuine Coca-Cola had passed my lips in about eight years.  My friend’s wife made a pot of delicious homemade chili that evening. I had two big bowls topped with a generous portion of shredded cheese and sour cream.  I capped the day by eating a third of a homemade blueberry cobbler.  No turning back. 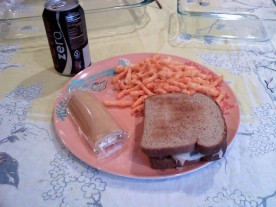 Monday: With an ample supply of groceries now at my disposal, I tapped into a primary vacation food resource when I tore open the first of several boxes of Cinnamon Toast Crunch.  CTC is my favorite cereal of all time, but I limit myself to consuming it only one week per year.  I go through about half a box per day during that week, however.  I also found a standard lunch for the trip: One or two provolone and turkey sandwiches on wheat, baked Cheetos, and a Little Debbie jelly roll, washed down with a Coke Zero.  We went to a restaurant called Hop Haus for dinner and I split an order of mediocre nachos[5] before ordering two buffalo chicken sliders and waffle fries.  I thought I was showing restraint by only ordering two sliders, but I may have suffered a slight tear to the lower esophagus nonetheless.  Difficult to say.  I’m not a doctor[6]. 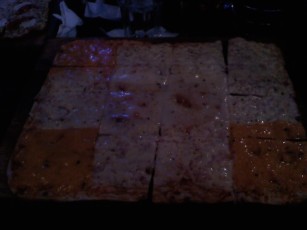 Technically NOT a pizza

Tuesday: I mixed things up at breakfast today and had a nauseating amount of Froot Loops instead of a vomit-inducing quantity of Cinnamon Toast Crunch.  My buddy had some auditions during late morning and early afternoon, so we ate lunch on the run.  That translated into a large quesadilla from Chipotle.  That evening, we went to a very competitive pub trivia contest at a semi-upscale college sportsbar called State near the campus of DePaul.  We finished fourth out of seventy-one teams[7], but not before polishing off slightly-better-than-mediocre nachos and a large flatbread apiece.  Mine was a four-cheese flatbread, which, coupled with the quesadilla from earlier, fulfilled my dietary cheese requirements through the year 2038.  I also drank at least a liter-and-a-half of real Coke. I tacked on a couple of jelly rolls upon arriving back at the condo several hours later. 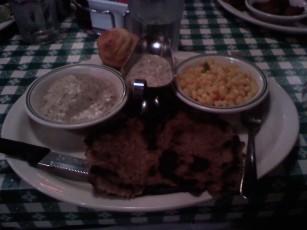 Wednesday: After inhaling another mountain of Cinnamon Toast Crunch and pounding down the turkey-and-provolone sandwich / Cheetos / jelly roll / Coke Zero combo, we all went out to dinner for the last time during my trip.  I waddled to a Louisiana-style restaurant and had Johnnycakes and chicken wings as appetizers, then a country-fried steak, mashed potatoes, gravy, corn, and a muffin as my meal. I still found room to go home and eat the last jelly roll immediately prior to going to bed. Always a great strategy[8].

Thursday:I broke my nightly fast by closing out Cinnamon Toast Crunch box #3, followed by devouring a heaping bowl of Froot Loops.  I lunched on the last of the turkey on my sandwich for the day. 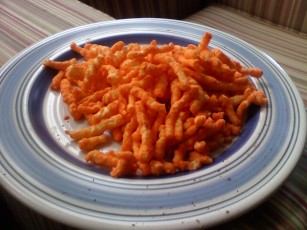 A cheesy cry for help

I enjoyed a generous serving of Cheetos with my lunch, but, with all food-related social norms now out the window, I ate a plateful of the crunchy, cheesy snack about a half-hour after my actual lunch.  I ended my vacation diet as it began, by bluberrying (or is that blueburying) myself, in this case doing so to the tune of two airport-bought muffins.

Final Thoughts: This is actually an improvement over recent years.  I would point out, for instance, that I didn’t supplement my sugary cereals with a package of Pop-Tarts each day.  Incredibly, I had neither burgers nor pizza[9] on my trip. That’s a monumental upset.  I would attempt to pat myself on the back further, but the ever-growing fat rolls make that increasingly difficult.  Also, all of this typing has winded me, so I’ll stop here.

[1] I applaud all of them for being willing participants / enablers in my gluttonous efforts.
[2] There’s a name for this goo, but it escapes my cholesterol-addled brain at the moment.
[3] Read: “Unhealthy.”
[4] Good movie. Not a must-see, but worth a look on Netflix or a matinee.
[5] Note that the quality of food involved never slows me down in any way.
[6] I’m barely a lawyer.
[7] We didn’t finish in the top three, so I can only assume we finished fourth. It’s called “logic,” people.
[8] If you’re a sumo wrestler, that is.
[9] Although that flatbread was pretty darn close. I win only on a technicality.
[10] Assuming I’m not in a diabetic coma or dead.

5 Responses to Portrait of a Cereal Killer