Discs four, five, and six of the Star Wars Complete Saga blu-ray set correspond to the so-numbered episodes.  As with the prequels, the picture and audio quality are very good.  The movies look noticeably better even than the high-quality DVD versions 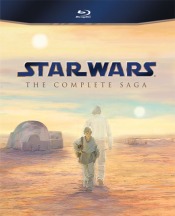 from a few years ago.  I talked about the commentary setup last time, but, briefly: You get two per movie.  One is a more traditional track that features George Lucas and a few others who were instrumental in the original trilogy.  The other is essentially a collection of interview snippets placed in a somewhat context-specific way throughout the movie, rather than a recording of someone who was actually watching the movie at the time.

How do the films themselves hold up?

Episode IV: A New Hope – Writing a review of A New Hope in 2011 seems a little pointless, but pointlessness never stopped me from writing anything, so here goes. People of my vintage have the beats of this movie ingrained in our collective DNA.  It was a revolutionary film on two very important fronts.

First, there were the special effects.  Effects production was nothing new, and was practically as old as moviemaking itself.  A New Hope was something else.  This was a somehow believable rendition of fictitious planets and battles in space.

Secondly, there was George Lucas’ contract with Fox.  Lucas was entitled to 40% of the net profits from Episode IV.  As anyone with knowledge of the movie industry will attest, net profits mean little, no matter the percentage.  The film industry’s creative accounting would have reduced even 40% of a blockbuster’s net profits to a pittance, if that.  But Lucas didn’t care.

Fox erroneously believed Star Wars wouldn’t be a success because sci-fi or fantasy pictures had a poor recent track record at the box office.  Therefore, the studio didn’t care about sequel rights (because there would be no sequels to an unsuccessful movie), licensing (because licensing was irrelevant before Star Wars), and merchandising (because no one would buy a t-shirt emblazoned with the logo from a failed film).

Fox thought it was making an advantageous deal.  It understandably appeared that way from a mid-1970’s perspective.  The deal Lucas actually had once the proverbial dust settled was either the most brilliant in the history of film or the luckiest.  Either way, it changed the way movies were marketed and their creators were compensated, specifically in regards to high concept potential blockbusters.

The movie itself, of course, is tremendously entertaining.  It’s not perfect, and it’s important to note that the rating below isn’t indicative of perfection.  Princess Leia’s intermittent English accent is inexplicable.  Some of the effects don’t quite “work” (but they’re the exception).  The special edition “improvements” sometimes aren’t.

One thing that stands out about this film is how “small” it feels, especially after watching the prequels.  Episode IV is actually grandiose in scope, of course, but it is by far the most “focused” of all six films.  For example, the action stays on Tatooine for over thirty minutes without shifting at all until a cut to the Death Star for the outstanding “I find your lack of faith disturbing” scene, during which the audience begins to realize that Darth Vader is something far more enigmatic than a run-of-the-mill villain.

Overall, though, it goes without saying that this is a classic piece of fantasy / sci-fi / adventure cinema.  Moreover, it’s one of the most important movies ever made.  Judging it purely as a story, it’s arguably not as well-crafted as Empire Strikes Back.  However, Episode IV must be allotted points for innovation, as well as the cultural and industry impact left in its wake.

Episode V: The Empire Strikes Back – There’s so much to love about this movie that I’m going to start off with the small quantity of very minor things that didn’t fit that pattern.

1. Why is John Ratzenberger‘s voice dubbed-over in his first scene, but NOT his second? It’s strange to hear some random voice actor when Ratz is speaking early on, but hearing Cliff Clavin a few minutes later.

2. The dialogue by and large is very good, with some great lines[1] but we still get the occasional odd word choice. “Laser-brain?” Really?

3. Leia’s passionate kiss of the guy who turns out to be her twin brother.  This wasn’t bad at the time, of course, but Lucas has maintained that he knew they were brother and sister from the get-go.  Call me old-fashioned, but I find two siblings trading tongue to be gross.

4. Luke was left-handed in the first film.  He suddenly becomes a righty in Empire (and this is before he gets his hand chopped off).

5. For the sake of pacing, the action shifts back and forth between Luke on Degobah and Han and group.  The problem is that the events in the two places seem to be happening at different rates.  Luke’s training on Degobah appears to occur over several days, possibly even weeks.  On the other hand, the Millennium Falcon’s escape from the Empire and time in Bespin probably takes place over many hours, or perhaps a few days.  This is something that’s not obvious without multiple viewings.  It “should” take Luke days or weeks to train with Yoda . . . but it’s unlikely that Han’s crew was stuck to the star destroyer or hanging around in that non-asteroid for days.

Time to put away the microscope and look at the good things about this movie.  Simply put, this is the strongest film I’ve ever seen in this genre.  The movie is well-paced, the action is outstanding, the actors all seem at home in their roles, the new characters we meet (Lando, Yoda, even Admiral Piett) add much to the movie, and, perhaps most importantly, the audience cares about these characters, old and new.  It also helps that the bad guys win, allowing for more creativity within the plot.

Even with all of the above, there’s little question that Darth Vader steals the show.

Coinciding with the debut of the Imperial March, Vader is pitch-perfect throughout as a short-tempered powerhouse who also TURNS OUT TO BE LUKE SKYWALKER’S FATHER?!?  WHAT THE F***?!?

It’s easy to forget this now, but that revelation was one of the most stunning in movie history.  Audiences at the time didn’t even know whether to believe it or chalk it up to the bad guy saying something to get inside the hero’s head.

Empire doesn’t have the historical and cultural significance of A New Hope because it wasn’t the innovator.  However, it has the best plot and the best lines of the series.  Finest of the six.

Episode VI: Return of the Jedi – Matching the accomplishments of the amazing and revolutionary Star Wars and the near-perfect Empire Strikes Back was going to be difficult under any circumstances, but Lucas did himself no favors by elevating the Ewoks to a major role in Return of the Jedi, foreshadowing some of the missteps of the prequel trilogy.

The Ewoks didn’t have to be a mistake.  There was nothing inherently wrong with a  moonful of primitives who happened to be adorable.  We get it, George, you like merchandising. 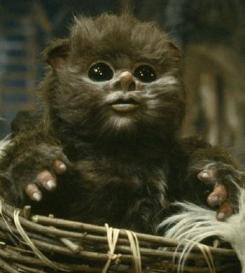 That much I could accept.  The problem starts when one considers that the same military that delivered a crushing defeat to the Rebel Alliance at Hoth (and which was simultaneously winning a battle against the Rebel fleet) was suddenly unable to defeat teddy bears with pointy sticks.  That’s a tough pill to swallow, even for longtime fans.

There’s another big problem with ROTJ, which is far more obvious: Another Death Star? Why re-hash that? I read somewhere that the original outline for Return of the Jedi had the Alliance making a final assault on Coruscant while Luke battled it out with Vader and the Emperor.  It’s easy to say this in hindsight, but that seems to make much more sense as a plotline than what Lucas actually did with Episode VI.

I have one more issue with the plot, albeit of a minor nature: When Han and Lando reunite in ROTJ, Han should hate Lando.  Last he knew, Calrissian had sold him out for the sake of protection from the Empire.  Han was frozen when Lando switched his allegiance, helped Leia, et al, escape, and spent months executing the rescue plan on Tatooine.  Yet, Han interacts with Lando as if Han were up to speed on everything that had happened.  I would have preferred a punch to the jaw by Solo prior to reconciliation.

Those are my three big complaints about Return of the Jedi.  They aren’t insignificant, but they aren’t fatal, either.  There’s still much to like about this movie.

The development of Luke into a full-fledged Jedi is well done.  The rescue on Tatooine is a nice opening action sequence.  I love that Luke calls BS on Obi-Wan’s “point of view” speech.  The environment of Endor looks great, and the Biker Scout chase sequence is exciting[2].  Pretty much everything that happens on the Death Star, from the Emperor’s arrival to the final light saber battle to Darth Vader’s redemption and unmasking, is badass.

Do the inserts of Boba Fett look awkward?  Yes.  Do I cringe just a little when I hear the new Darth Vader “Nooooo!” when he saves Luke?  Yes.  Should they have left Hayden Christiansen out of the final scene?  Yes again.  But the music change at the end was a very welcome one, and the CGI blinking for the Ewoks isn’t terrible and makes them look less teddy-bear-like.  The saga reaches what is ultimately a satisfactory conclusion.

No, it’s not as good as the other two, but the prequels reminded us that the good vastly outweighs the bad in Return of the Jedi.

Next week: The bonus discs.