I love Major League Baseball, but my first and greatest love as a sports fan is the National Football League. 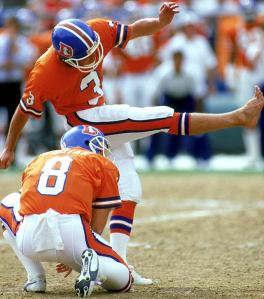 One of the many peculiar things about me is that I own a large DVD album filled with disc after disc of the television broadcasts of NFL games I deemed worthy of memorializing.  I recorded most of these classic games myself when they actually aired.  Part of my annual routine in the two weeks leading up to the Super Bowl is to revisit a few of these classic contests.  I focus mostly on the Super Bowls themselves, but I’ll occasionally dust off a good playoff game or two.

Seeing these old games reminds me of how many commonplace facets of the sport  from a generation ago (which, sadly, now means my generation) would be strange to a modern audience.  These oddities ranges from the uncluttered screen of a 1980’s NFL broadcast to the presence of multiple professional kickers who thought it was a good idea to kick barefoot, even in freezing temperatures and snowy conditions like the ones present in the 1986 AFC Championship Game.

There was something else I noticed in that particular game that, insofar as I’m aware, has never happened before or since.

The ’86 AFC title clash took place in Cleveland at old Memorial Stadium.  For some unknown reason—perhaps as a gesture of goodwill by Art Modell, maybe to add to the “big game” feel, or possibly just as an ironic “F___ you”—the Browns decided to decorate one of their end zones with the Broncos’ name, colors, and logos.

I should clarify that.  The Browns decided to decorate one end zone with the Broncos’ name in the Cleveland Browns font, and colors and logos that sort of looked like the ones Denver uses.

Here are a few pictures to explain what I mean.  First, here’s a wide shot that shows the “BRONCOS” end zone in front of the notorious “Dawg Pound.”  As I mentioned, the font is the same as the one the Browns use (i.e. the “B-R-O” looks exactly the same as it does in the Browns’ end zone). 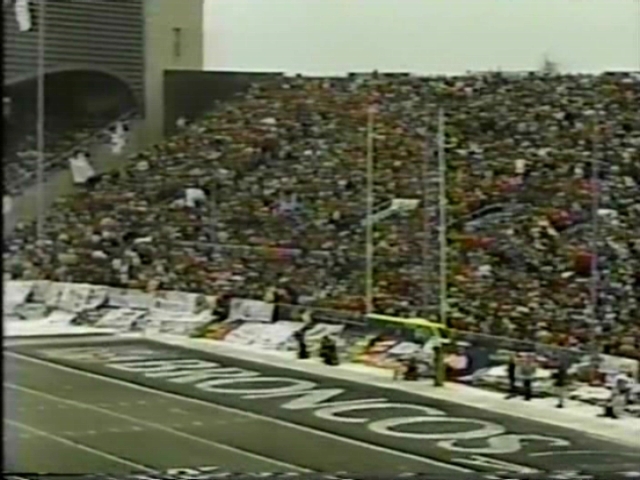 The next picture is a high-angle shot that provides a better look at the lettering. 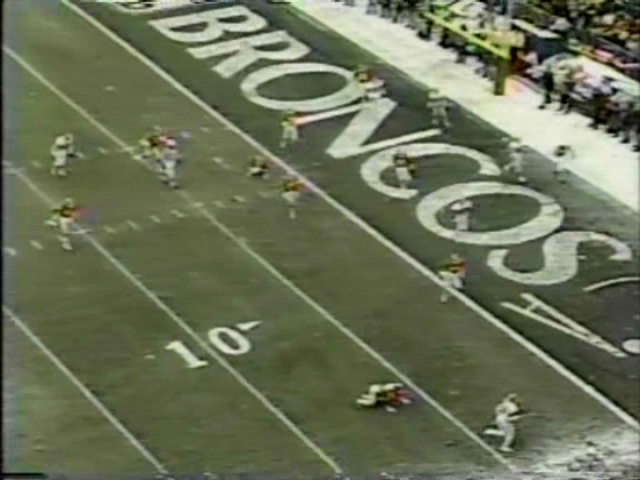 Finally, here’s a look at the makeshift helmet and logo design that the Browns’ groundskeepers painted.  As you can see, it doesn’t exactly look like the genuine article, but it’s close enough.

The reasons behind this strange decision may be shrouded in historical mystery.  Putting both opponents’ names in the end zones for a non-neutral-site game is very unusual, perhaps singular.  I suspect we won’t see the likes of it again anytime soon—although we may see it before we see another barefoot kicker.

2 Responses to You Won’t See This Again Anytime Soon