A convincing victory by 30 Rock last week reinforced the balance among the three shows we’ve seen so far this year.  There hasn’t been one show that’s dominated so far this year. In fact, I don’t think any of the shows has won back-to-back weeks when all three had new episodes. How did things shake out this time around?  Let’s take a look.

Tonight’s Episode: Jack’s mugging prompts a mayoral bid, Liz has some fun dressed as a crazy old lady, and Paul and Jenna work out some relationship issues.

Good Stuff: Joint Pain Walkathon . . . Bat hawks . . . “Begin ‘Snow Dogs’ phase!” . . . Jack and Liz arguing over whether it’s Ghostbusters all over again or Ghostbusters II all over again . . . “Is that brain?!? Hopefully, it’s not an important parg of my blern!” . . . Irish Arguments Weekly, America’s only all-caps magazine . . . “MUSIC(lightning)BAND” . . . “Yawns are contagious…like all the Thai STDs my penis is about to give you” . . . Jack thinking Tommy Hilfiger of all people should understand how quickly the lower classes can ruin something . . . “…slogan to come” . . . “You smell like when the Stone Mountain tire fire joined up with the corpse fire, and then swept through the Manure District. It was our fault for letting those high schoolers dance at their prom” . . . Liz’s one remaining rule . . . I liked that it turned into the Dark Knight . . . “There’s a war going on out there, and you’re going to have to pick a side. I’ve always wanted to say that, and I can’t believe I have wasted it on you” . . . Darryl Weenis . . . “…been trapped under a boulder for a hundred and twenty-EIGHT hours” . . . “I’ll never forget the first time YOU dressed up like an old lady and I threw you into some garbage”

Non-good Stuff: I understood what they were going for with the “so weird because it’s not weird” thing with Jenna and Paul, but it just wound up mostly “so funny because it’s not funny” . . . We saw Katrina Bowden for the first time all year, but she had one line.  I hope she’s shooting a movie or something . . . This show is really missing Grizz and Dot Com.

Overall: This was the second episode in the last four that felt like it wasn’t part of the regular continuity.  There was no Liz-and-Criss, there was no Jack trying to get Avery back, no reference to America’s Kidz Got Singing, not even a Hazel Wassername sighting.  Other than one throwaway line about Kenneth leaving for a new job (which may have been added in later), this episode could easily have aired as the second-to-last show of last season, or the second show of this season, and it wouldn’t have mattered.  Anyway, the Liz and Jack storylines were both decent and came together nicely with a Batman motif.  The Jenna and Paul stuff just didn’t do much for me. It’s strange: I was probably a bigger Will Forte fan than just about anyone when he was on SNL, but I think his character on 30 Rock may have run its course.  A character built around being a weirdo loses some of its potency after too many appearances.  I’m not sure if that’s happened completely here, but it’s starting to feel that way.  Kenneth had most of the best lines of the night.  This was a step down from last week’s very strong show, but not a bad one by any means.

Tonight’s Episode: Dwight’s team travels to Tallahassee to begin the process of launching a series of Sabre stores, while Andy handles reception duties back in Scranton.

Non-good Stuff: I really don’t like Catherine Tate’s character.  I said that last year when she was one of the managerial candidates, and I say it again . . . It worked out fine, but the premise that DM would send its receptionist to an important strategy meeting (and that the branch manager would take over that spot) is a little preposterous.

Line(s) of the Night: “It can’t be appendicitis.  I eat more than enough bacon.” – Dwight, scientifically ruling out one possible diagnosis.

Overall: This was a great one. Dave Koechner always brings his “A” game.  Dwight was over-the-top, but in a way that is entirely consistent with his character.  I love Erin when she’s not pining after Andy.  The opening sequence with Jim was fantastic, and I really liked his adulation of Stanley.  Ryan had a couple of great lines as per usual.  The writers also did a terrific job of having a second story that had to be totally unconnected to the first due to the two far apart settings.  They focused on the Tallahassee story and gave it the lion’s share of the attention, as it should have been.  As a bonus, none of the fears I had last week about the show getting too “soap-y” materialized (yet).  One of my favorites in a while.

Tonight’s Episode: Mallory finds herself in a sticky situation and calls Archer and Lana to get her out of it.

Non-good Stuff: I’m a big fan of the ensemble on this show, but having all of them show up was too contrived even for me . . . The ending didn’t work for me, as it felt like the entire episode was just an (often funny) way to get to that point and set up continued business relating to Archer’s uncertain origins.

Line of the Night: Basically everything said at the dinner party, complete with fake British accents.

Overall: This one had a lot of potential, and the highlight was probably the faux dinner party, but it seemed like this was written from the end point backwards.  I think that hurt the last act.  The overall plot didn’t work as well once all the pieces were in their proper places.  I did like that this episode was a nice change-of-pace in that the entire show more or less took place in one apartment.  The lack of action was actually a good thing in that respect. 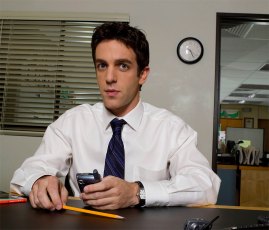 Final Thoughts: This was an easy win for The Office, which came up with one of the better episodes I can recall in some time.  Reading other reviews of The Office this year has been an eye-opening experience.  Opinion about the show seems to be all over the place, whether it’s a discussion of the long-term future of the program, or a critique of an individual episode.  Shows I’ve liked a lot have been judged as mediocre by others, and vice-versa.  There will always be outlier opinions in such a subjective analysis, of course, but there seems to be less consensus about this, the first Michael-Scott-less year, than any other.  Nevertheless, I liked this one a lot, and it made me much more optimistic for the next few weeks, although I still think the season finale will be a cliffhanger with a lot of relationship implications.