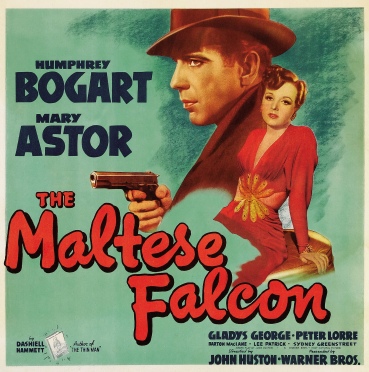 The 1941 film is one of the earliest, greatest examples of film noir.  It stars Humphrey Bogart as Dashiell Hammett’s Sam Spade, with Mary Astor, Sydney Greenstreet (who was nominated for an Academy Award in his film debut), and Peter Lorre rounding out the other major characters.  Elisha Cook, Jr., whom I know better as “Ice Pick” also has a big supporting part, oddly playing a man about 15–20 years younger than his actual age at the time of filming.

This film was also John Huston’s directorial debut.  Huston famously analyzed every shot in painstaking detail prior to filming.  Several of his techniques created shots that were considered novel and brilliant.

Admittedly, that’s one of the drawbacks of watching this movie for the first time in 2014, after a life filled with modern film: It’s much more difficult to spot Huston’s ingenuity, because I’ve unknowingly watched dozens of movies that have probably used (or copied) similar shots.

As it is, I’m left with a film that seems overrated—The Maltese Falcon was #23 on AFI’s 1998 ranking of the hundred greatest films in history.

It is by no stretch of the imagination a bad film.  Quite the contrary.  But it feels . . . small.  As I said at the top, The Maltese Falcon resembles a play.  Most of the scenes are lengthy by modern standards, dialogue-heavy, and take place in small rooms.

While not a fatal flaw, that fact does become noticeable over time.  More puzzling is how I’m supposed to feel about Spade’s relationship with Astor’s character, femme fatale Bridgid O’Shaughnessy.

Spade simultaneously seems to love her sincerely, while also feeling an obligation to send her to jail.  While such a conflict isn’t unusual in storytelling, what is unusual is the fact that Spade doesn’t seem conflicted at all: He fully intends to send her to prison, but also says that he’ll happily see her when she gets out.  That absence of internal struggle perplexed me—either I missed a very dry, nuanced element of Bogart’s performance (possible), or Spade reacted to that whole situation in an unnatural way.

Another minor annoyance was Spade’s improbable and repeated ability to wrestle guns away from people without so much as an accidental shot being fired, much less an intentional one. 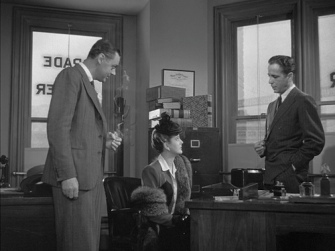 There’s an interesting bit of film history / trivia surrounding The Maltese Falcon.  The short version is this: There was actually another Maltese Falcon film produced a decade earlier.  When Warner Brothers wanted to re-release the film in 1936, they encountered a problem: In the years between the film’s original run and the intended re-release, the Hays Code had begun to be enforced.

Some elements of the 1931 version of The Maltese Falcon dealing with sexuality didn’t pass muster five years later.  Specifically, a scene of a female character bathing, the fact that Spade is having an affair with his partner’s wife, and the homosexuality of three of the antagonists.[1]

Warner’s solution was to re-adapt Dashiell Hammett’s work into a new film.  As The Maltese Falcon had come out just five years earlier, the studio decided it was too soon to release another movie with the same title and exact story.  So, they released it as Satan Met a Lady, changed the characters’ names and the object for which they were searching, and altered other aspects of the story that pushed the movie into the “loosely-based-upon” category.

The film had a much more whimsical tone than the classic that would follow five years later.  In fact, star Bette Davis had serious conflicts with Satan Met a Lady‘s producers over the quality of the work, even going so far as to call the project “junk” and failing to report to the set in protest.

So, John Huston’s The Maltese Falcon was actually the third version of that same story released inside of a decade.  Many people—myself included—criticize modern Hollywood for lacking creativity as the industry relies on questionable source material and reboots franchises with increasing frequency.  Surprisingly, The Maltese Falcon provides some evidence that this isn’t an entirely new phenomenon.

Anyone who considers himself a film buff needs to see The Maltese Falcon at some point.  However, the modern viewer may not find the film quite as riveting as it’s cracked up to be.  As I’ve already discovered in doing this series, some films simply hold up better than others.

Even with an arguably diminished impact, The Maltese Falcon is still a good movie with memorable performances, particularly from Greenstreet, Bogart, and the always-creepy Lorre.

[1] The latter two components are present in the 1941 version, but are downplayed quite a bit.  Greenstreet, Cook, and Lorre’s characters are all lightly implied to be homosexual.  This idea is stated several times in a much more direct (and mocking) way by Spade in the 1931 film.