30 Rock’s stranglehold on SitCombat continued with a fifth straight win on March 29th.  The absence of Archer following the completion of its third season has removed much of the competition (and, so far, suspense) from SitCombat.

The Office has actually been quite good for a lot of this season, the first without Steve Carell.  The problem is that I didn’t begin SitCombat until both Archer and 30 Rock had returned.  Unfortunately, most of the best eighth-season Office episodes aired before SitCombat kicked off.

Unfair?  Almost certainly so.  That’s why I’m mentioning now that the Office really has had a decent season overall, despite the fact that 30 Rock has been dominant of late in terms of wins and losses.

And, at the risk of giving it away, it didn’t help that the Office was a rerun yet again this week.

Tonight’s Episode: Jenna tangles with the writers, Tracy’s personality (and productivity) is altered when a minor medical procedure restores his sense of smell, and Jack attempts to give Pete some self-confidence.

Good Stuff: “The…complete…package” . . . “Don’t read that! I filled it out last night after mixing alcohol with prescription…exhaustion” . . . “This is Jenna, what are you wearing?” . . . “This isn’t body paint!  It’s a spray they use to kill geese at airports!” . . . “What happened, J-Mo? Did you pass out in a goose costume at LaGuardia?” . . . Desirz . . . “I feel an old jack-o’-lantern from last Halloween” . . . “Who has the time? With work, family, and hobbies, and listing excuses…” . . . Pete’s pause / paws joke was right in my corny wheelhouse . . . Pete recounting his canon from the show, and Jack responding, “If it weren’t all true, I’d say it doesn’t even make sense” . . . Dr. Spaceman’s options to Tracy . . . “You know what else is from the 70’s?  Women staying quiet” . . . Dr. Spaceman’s in-office conversation with his lover via bluetooth . . . “So, if you do have an extreme reaction, please try to get it on video for my nephew’s funny website!” . . . Jenna getting a “Free Lyle Menendez” tattoo…in 2007 . . . “Oh, look at us laughing together! Like a couple of Jews watching the Daily Show!” . . . Pete kissing the dummy . . . Toofer mailing provocative photos to Marilyn Vos Savant . . . “You know, smell is the sense most closely associated with memory.”  “I know, Dot Com.  That’s why, whenever I smell that jacket, I remember being bored.”  “The only person you’re insulting with that attitude is yourself” . . . Midnight Symphony, with the black guy choking the white cop at the end of the commercial . . . Pete was mugged by two five-year-olds in a trench coat . . . The Ring . . . “It’s a California Kong, which is two California kings tied together with gorilla leather” . . . “Iinvented business mumbling.  You white garbage bag full of pudding” . . . “Or, I could be six feet under…in the subterranean paradise we built to escape the poor” . . . Pete’s birthmark looks like a swastika made out of penises . . . “Why are you so heavy?!?” “‘Cause so much of me has died” . . . “Goodbye…only evidence tying me to my ex-wife’s disappearance” . . . Lutz’ demonstration of his listening skills.

Non-good Stuff: I don’t think Tracy knows how to say “jack-o’-lantern” properly. Or I don’t.  One or the other . . . The Tracy plot got just a little bit too silly at points.  The idea of reversing the procedure that restored his sense of smell by sticking something else up his nose veered into cartoon territory.

Line of the Night: “Are you quoting Lord of the Rings?” “No. I’m quoting myself talking to Bruce Willis” – Pete and Jack discussing Jack’s inspirational speech about why Pete needs to shave his remaining hair (“The Ring”) in order to have nothing left to lose.

Overall: Not many complaints this week.  Other than the minor quibble with the cartoonishness at one point, this was yet another outstanding episode in an impressive string of them.  The writing was so good (and dense),I almost felt like I was transcribing the entire script at the outset.  Two of the three storylines were superb, and the third was good, if slightly flawed.  Another thing I liked about this episode was the good utilization of the supporting characters.  The Pranksmen were in rare form, Dr. Spaceman was tremendously entertaining, and Dot Com and Grizz provided a scene-stealing moment as usual.  Great episode.

Good Stuff: I enjoyed Stanley and Dwight colluding as a means of obtaining free meatballs . . . “I haven’t proposed to anyone in years” . . . I liked Jim’s tips for leaving a party early . . . “I guess Andy isn’t totally over his current girlfriend” . . . “Why would you choose me? Because I’m mighty?” . . . I enjoyed Robert California’s tour of the house . . . Gabe and Ryan having to take their sycophantic behavior to its logical conclusion.

Non-good Stuff:  Two unrelated jokes with the word “vibe” in them in a span of three seconds. Sloppy . . . I don’t really care that much about most of the romantic relationships on the show, and that’s a big problem (see below) . . . What does Creed have to do to get a line these days? . . . I’m hoping that Jim beating a hasty retreat after drinking half a bottle of wine won’t come back to haunt him later . . . Ditto Oscar and Toby . . . They’re turning Andy into too pathetic of a character.

Line of the Night: “I know.  I could just bang you right now.” – Dwight, trying to sell his chemistry with Erin to a disinterested Andy.

Overall: Back when this first aired, I was starting to worry that the show was beginning to kowtow to the critics who argued that the Office needed a primary driving plot (or plots) to protect it from the comedic hole left by Steve Carell’s departure.  Up to this point in the season, most of the shows this year had been just as funny as the seventh season. However, it was around this time that romantic storylines began to receive greater emphasis, with at least three ensemble characters whose romantic interests are eating up a lot of clock on the show.  More and more, I felt like the bits used for the show’s opening—which are normally in-office shenanigans—are what should have been presented as the major storylines, but, instead, they were being de-emphasized.  The show rallied when the workforce split during the Tallahassee arc, but the most recent new episode was one of the weaker in recent memory.  Anyway, after a generally-strong first half of the season, this particular episode kicked off the second half with a so-so show that skewed too weird at points.  I gave it a “C-plus” the first time around.  I won’t dock it any points as a rerun. 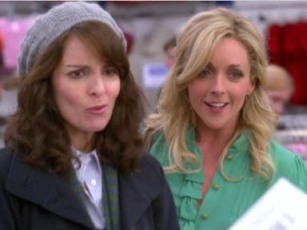 Final Thoughts: I confess to feeling a little guilty about the Office not winning more often.  The Office very nearly beat a good 30 Rock last week with a rerun.  It’s just a shame that the season was somewhat front-loaded.  But, as they say, them’s the breaks.  30 Rock wins for an amazing sixth week in a row.  I doubt that will ever happen again under the current format of SitCombat.