I was watching the most recent non-rerun edition of Saturday Night Live a few weeks ago when it dawned on me that the venerable late-night sketch comedy show hadn’t told a joke adverse to President Obama for three consecutive episodes.  Nary a mention on Weekend Update, and the only sketch that included him was a largely-affectionate Cosby Show parody.

I recall thinking at the time that it’s difficult for a show built upon a foundation of irreverence to do its job properly if it reveres the president.  By definition, that cannot work.

Even more surprising was the timing of that creative choice (not that it’s anything new): This is a presidential election year.  The idea of a president up for reelection not being discussed on SNL seemed ludicrous.

Two internal counter-arguments immediately sprang to mind.  First, we’re in the early half of the election cycle, not the fall portion.  Maybe it’s not that unusual for the president to be ignored in the first half of the calendar year.  Secondly, perhaps I’m suffering from faulty memory.  After all, the last time we actually had a sitting president running for a second term was eight years ago.  On the other hand, I’ve been watching SNL since I can remember, and I’ve caught up fairly well on the shows before my time.  I would go as far as to say I’m safely in “buff” territory and at least within shouting distance of “expert.”

My solution was to do some research to see if the numbers matched my supposition.

As the horrible pun in the title of this piece indicates, I’m only going to present the data I unearthed.  You can draw your own conclusions, although I doubt I’m breaking any new ground with these findings.

Before I present the numbers, I want to explain the methodology: Using one of my favorite websites, SNL Transcripts, I counted the number of shows in which the candidate of the incumbent party appeared as a character in a sketch.  I didn’t attempt to determine the nature of that representation.  For example, the fairly “soft” Cosby Show sketch I referenced earlier counts just as much as a sketch replete with scathing criticism.

Finally, to make sure it was an “apples-to-apples” comparison, I only analyzed the first half of the election year.  That is, the sketches that appeared in the second part of the television season, meaning January to May.  I may revisit this topic in the fall and crunch those numbers as well, especially since that saves me the trouble of analyzing the lyrics of some forgotten pop ditty from 1987.

Recapping those as percentages:

For those of you who aren’t great with numbers, here’s an exceedingly amateurish graph to help clarify things: 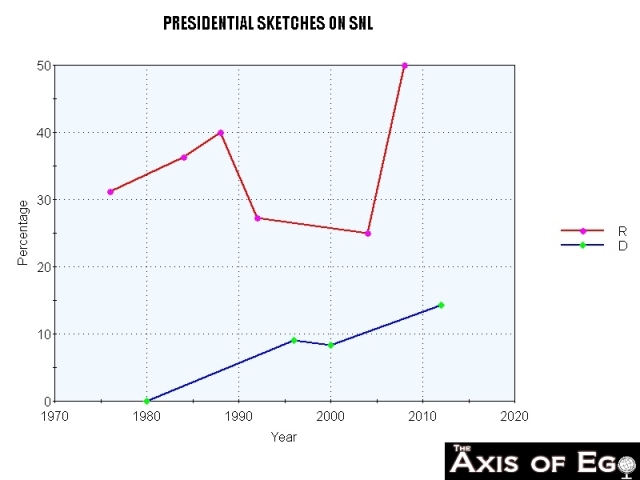 Not a big deal?  Big deal?  If so, how?  Should viewers be offended?  Upset?  Annoyed?  Should they be none of those things and just shut the hell up?

As I said at the top, I won’t be answering any of that.  I imagine that an individual’s response will depend largely upon the prism through which he views the information.  It all makes for an  intriguing comedic and political litmus test.

Make of it what you will.

* The small sample size here was the result of a writers’ strike that cut the season short.

** There was one episode in which John McCain actually appeared in multiple sketches, playing himself.  I counted this show, since there was a John McCain character in that episode.