Hello there, SitCombat.  It’s been a while.

It is nearly December, and, in these virtual pages, SitCombat makes a return that I can only assume will be triumphant.  A combination of some downtime for the shows, plus a week in which I didn’t write an article thanks to my political yammering, leads to this: “Dark matches” or not, The Office has won two in a row for the first time since . . . well, maybe ever.

Now, SitCombat is back in earnest.  Will Jim, Pam, and the gang be able to take a third win in a row?  Or will the pressure of actually getting the full write-up treatment be too much for the venerable NBC sitcom to bear?  I ask, of course, because my creeping mental illness causes me to believe that my nearly-anonymous writing affects the performance of television writers and actors on shows that were filmed months ago.

But enough about me and my wacky brain! Let’s make with the comedy!

Non-good Stuff: The Dr. Spaceman scene wasn’t awful, but it’s usually a highlight of the show, and it wasn’t this time . . . The woman who married Liz and Criss must be famous, because that band-aid wouldn’t just “happen.” I think I’ll feel dumb when I realize who she is. Too lazy to Google it.

Line of the Night: “If by ‘they’…you mean ‘those guys or whatever,’ yeah” . . . “You remember Megan Duffy. Maiden name ‘Duffy,’ hopefully no relation.” – Dennis, nailing it as usual.

Overall: Great episode, especially considering that wedding episodes (particularly for a show in its final throes) is such a TV sitcom cliche.  As usual, the 30 Rock writers were up to the challenge, delivering a story that never sacrificed comedy.  Dennis Duffy stole the show, but I enjoyed the Jenna story a lot, too.  The Tracy story was a notch below the others during act two, but picked up steam when Tracy was nailed by that cab.

Tonight’s Episode: Oscar has to navigate the consequences of his secret affair, Jim tries to convince Phyllis and Stanley to help cover for him at work, and Pam gets her first work complaint ever.

Non-good Stuff: They replaced the staple shot of “manager adjusting thing on desk” with a shot of Jim and Pam kissing in the open? Uh-oh. That doesn’t bode well. Come back, soon, Ed Helms! . . . I know this is just a TV show, but in what white-collar environment would a person in the sales department be allowed to spend all day painting a mural in the warehouse? Oh, wait, should I NOT be asking questions like this nine seasons in? You’re right . . . I don’t care about this mural or Pam’s insecurities about her artistry . . . Dwight being the voice of reason seems a little “off” . . . Pam’s call was kind of lame . . . Angela and Dwight, Pete and Erin: Just get together already.

Overall: There’s a lot to like.  It wasn’t all good, but the positives outweighed the negatives this week. Andy’s evolution from show highlight to near-albatross was never clearer than this week, when his absence not only didn’t hurt the show, but may have actually helped it.  I don’t think I liked this one as much as I did the episode from a few weeks back (the last full one I reviewed), but it was still a quality outing.

Tonight’s Episode: Pete tries to buy some new shoes, Ruxin seeks to undermine a rival co-worker, and Kevin and Jenny invest in a musical instrument for their daughter.

Good Stuff: Jenny’s point about woodwinds is valid . . . I liked how defensive Adam McKay got when they explained why the dog was barking . . . “THIS guy!” . . . I liked that Jenny was flattered . . . “Even if she towels down her gens post-intercourse, he’ll smell it” . . . “No…it’s like listening to Kevin and Jenny have sex…two minutes of silence, then tears” . . . “I hear seeing-eye dogs are good lays. Very obedient” . . . “He stayed with me for a full week. He’s bound to pick up a few things” . . . “Why would I not take care of my feet?” “Because God didn’t take care of your feet.”

Non-Good Stuff: The Pete / J. B. Smoove storyline did nothing for me, and I normally find Smoove very funny . . . Unfortunately, that wound up being the “A” story, so I think you can probably guess how I felt about this episode as a whole.

Line of the Night: “Whoa! Talk about chemistry!” – Andre, on Ruxin’s interaction with his rival female coworker. It was a throwaway line, but it struck me as very funny.

Overall: Not terrible, but not much here compared to the rest of the season so far.  This episode looked like it was shot at a time when the various actors had other commitments.  There was only one short scene with the gang all together, and only a very quick reference to football in the episode (plus Jimmy Johnson appearing in the background once).  The good news is that there were no awkward cameos this week with non-actors playing themselves.  I’ll cut this episode some slack because of that alone. Still, I have laughed consistently at this show all season, but this wasn’t its finest hour.  Or half-hour, I guess. 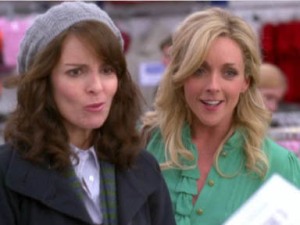 Final Thoughts: The Office wasn’t bad this week, but 30 Rock reclaims the throne after an episode that had me laughing almost non-stop through the first act, and consistently during the second and third acts. The League struggled a bit this time around, but they were due for a so-so show. This has still probably been the FX comedy’s best season so far. For now, Liz Lemon reigns supreme.