I could begin this week by explaining that SitCombat is tardy thanks to my working late, or my preparing tax documents, or my being a little under the weather.

True or not, though, nobody cares.

This week marked the first new episode of The Office in a month. As such, the brutal comedy warfare known as “SitCombat” resumes.  Archer has been going strong during the interim.  It would be difficult for The Office to top Archer right now in any event, but making matters worse might be the fact that tonight’s episode is “The Farm.”

To get those who may not be aware up to speed, “The Farm” was supposed to be the (backdoor) pilot episode for the Dwight Schrute spin-off that would continue on after The Office ended this year.  As it turned out, execs didn’t like the pilot enough to give it a series order, so the episode was shuffled into the rotation as a regular season nine Office ep.  But the production number indicates that this “should” have been the fifth episode of this season.  Yet, it was postponed until now, after a month of re-runs.

Suffice it to say that that fact pattern doesn’t bode well.  As always, though, I’ll keep an open mind.

Tonight’s Episode: Dwight faces a decision about his aunt’s farm and reconnects with heretofore unmentioned siblings; An old frenemy returns to the office to make amends(?).

Non-good Stuff: The fact that this is a backdoor pilot means that we also have to get introduced to a bunch of new characters who would have formed the cast of the new show. This is incredibly tedious when the viewer has the knowledge that the new show will never exist . . . You waste Todd Packer’s return on this episode?  Oh, f*** you, Office . . . TOO MANY NEW CHARACTERS WE’LL NEVER SEE AGAIN . . . Not to beat this dead horse, but showing this episode out-of-sequence means that so many of the storylines of recent episodes are necessarily ignored . . . And, now, we’re getting exposition in the form of a video will.  Awesome . . . So much information that will be irrelevant in ten minutes . . . These weird Schrute customs are so weird and funny!

Line of the Night: “You don’t fire the Pack-Man and expect to get away with it!” – Todd Packer

Overall: This is just a guess, but I think the in-office sequences were possibly re-shot to include Todd Packer in order to bolster the episode.  That could be totally wrong, but it seems like they knew they had an episode that would be a total waste of time (instead of just mostly a waste of time) and added the Packer storyline.  The Packer stuff saved it from being a total loss, but the episode becomes almost meaningless in light of the spin-off not going into production.  The network was right to pass.  If it had been 100% “The Farm,” this would probably be an F, but the Todd Packer moments helped a little.

Non-good Stuff: Shouldn’t have gone to the “Little column A / Little column B” well more than once, if at all.

Line of the Night: “NO, I sarcastically climbed all the way up here to see what your bonus is . . . He said.  Sarcastically.” – Archer

Overall: A good episode, but fairly “disposable.” That’s not really a criticism. It’s just that anyone watching this season could probably skip this one and not miss anything. But the more important point is that it delivered laughs. Good, solid, tight. Not one of the better episodes of the series, but consistent throughout, with lots of funny lines. 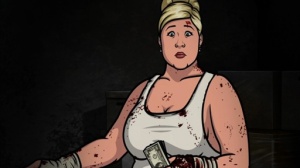 Final Thoughts: To be fair to The Office, I think this episode has to be taken with the proverbial grain of salt.  Pilots are usually clunky and exposition-heavy to begin with, but airing what turned out to be a failed pilot as a mid-season episode in the final year of a long-running, popular sitcom is a tall order.  So, I sympathize with the minor predicament NBC was in vis a vis “The Farm.”  The episode didn’t bother me in the same way that the boom mic operator story arc did.  It just wasn’t very good, and magically introducing not one, but TWO siblings for Dwight who have never been mentioned before (and never will be again) becomes very awkward.  Anyway, all Archer really had to do was show up and deliver a half-decent episode to win.  It instead delivered a full-decent episode and takes this week’s SitCombat handily.