If there’s an upside to having to listen to national arguments about “offensive” ideas on a weekly basis, it’s this:  The increasing frequency of those debates has highlighted a misguided point repeatedly made about “free speech.”

The argument normally follows these beats: Public figure “A” (or organization “A”) says something that runs counter to elite sensibilities.  Taste-makers not only condemn “A,” but they also attempt to force a third party (usually an employer or content-provider) to sanction “A.”  Opponents respond that those sorts of efforts are anti-free-speech.

Here’s we encounter the problem.

The usual retort, in a smug, “don’t-you-know-anything” tone, is to say something like: “These are private actors, free speech doesn’t apply” or “the First Amendment only prevents the government from punishing speech, dummies.”

These statements are as telling as they are troubling.

The first mistake is using “free speech” and “the First Amendment” protection of speech interchangeably.  It is unquestionably true that the First Amendment applies only to government action, rendering unconstitutional any law that criminalizes, significantly burdens, or otherwise bans protected speech.

It’s also true that the precise location of that constitutional “line” has shifted noticeably over the centuries.  Our modern understanding of the free speech / expression protection in the First Amendment is that the government cannot punish someone for merely conveying an idea, without more (e.g. a credible threat of violence).

However, this legal protection is not the totality of what we mean by “free speech.”  Free expression and freedom of speech are broader cultural ideas.  Rather, the First Amendment protection of free speech is merely the constitutional manifestation of that broad notion.

I absolutely agree that, from a legal standpoint, “free speech” is that which is protected from government interference by the First Amendment.  Yet, if someone prefers that a cultural commitment to free speech be limited to the bare minimum required by the Constitution, I question whether that person has any meaningful belief in free speech at all.  In fact, it’s not absurd to call such a person “anti-free-speech.”

Here’s an example to illustrate my point.  The Fourteenth Amendment requires, among other things, equal protection of the law, irrespective of race.  Anytime there’s state action (as with the First Amendment), the governmental actor in question must not discriminate based on racial classification[1].  A municipality can’t constitutionally open a public swimming pool for whites only, to use one very basic example.

So, if a person who says he would never have a black man as a friend, or who would never voluntarily do business with a person of Asian descent, or who commonly refers to a particular racial group as “dirty (whatever)” also claims that he has a commitment to racial equality—because he believes in the Equal Protection Clause—wouldn’t that seem a little ridiculous? 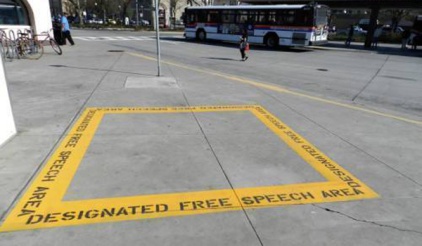 I think so.  And it seems equally ridiculous when someone who calls for “offensive” speech to be forced out of popular culture, or for political opinions they don’t like to be grounds for career forfeiture, also claims that he is pro-free-speech.

A belief that those whose opinions differ from yours should be silenced does not represent a commitment to freedom of speech simply because you don’t think the government should be doing the silencing.

What I think that mentality reflects is a kind of weakness: People are surprisingly accepting of the suppression of views they don’t like, and they’re quick to rationalize it as part of some “greater good.”  If a view they favor is being chilled, they suddenly become champions of free speech.  When one of those unacceptable views is expressed, though, they’ll quickly find a pretense for why its elimination is justified.

Needless to say, this is the antithesis of a firm commitment to free speech.  Views that are considered unoffensive never need protection in the first place.

The examples of this kind of anti-speech attitude are bubbling up on a daily basis now.  That’s particularly true this time of year, when college graduation season brings with it a spate of stories related to commencement speaker protests or “un-invitations.”

In a recent editorial for the Wall Street Journal, Harvard professor Ruth Wisse lamented what she calls “the closing of the collegiate mind.”  Specifically, she cited the increasingly prevalent (and anti-democratic) attitude on college campuses that uniformity of opinion is mandatory.  That attitude is sometimes exhibited to the point that those who express an unpopular idea are quite literally prevented from setting foot on campus.  Wisse highlights how the prevalence of one-sided arguments (or, as I call them “only-sided” arguments) dominate academia, aided and abetted by faculty either in full agreement or too frightened to speak in opposition.

In one striking example, Wisse recounted how a student group asked her to participate in a public debate on modern feminism.  After agreeing, thinking such a discussion might be “fun,” she waited for confirmation of the particulars.  Several delays later, organizers told her that the debate would not take place, as no pro-feminist speakers could be found.

Why?  “Because what is there to debate?,” asked a prospective panelist.

Wisse contrasts that experience with her participation a 1995 campus debate on affirmative action that drew so much interest that it had to be moved to the largest auditorium available.

Welcome to the future.

Now, intellectual curiosity and open-mindedness is seen as a form of heresy when it is applied to “incorrect” viewpoints.  As I alluded to earlier, the dominant belief is not just considered the better argument, it is considered the only argument.

If you want to see this blueprint in action outside of an academic setting, look no further than this 2013 column by Gregg Doyel.  In it, he argued that not only is there only one right side to the debate over the Washington Redskins’ nickname[2], but ominously threatened that people on the other side would face dire consequences in the future if they refused to keep their opinions to themselves now.  Twice, in fact, he directly tells those who disagree to “keep quiet.”

This is not progress.

Doyel—a good writer—was ahead of his time, albeit only by a matter of months.  Dissent from whatever the prevailing attitude is within the media and academic communities will often result in severe sanctions.  Those on the “right side of history” (a phrase I detest for its arrogance and myopia) dictate terms.  Many who feel empowered to fight “offensive” speech now openly warn their opponents to keep their mouths shut, or else.

And why shouldn’t they?  After all, someone who disagrees with you on a topic about which you care deeply must be stupid, morally defective, or both.  In any case, they’ve forfeited the privilege of speaking by believing the wrong thing, right?

That brings me back to the beginning.  The First Amendment only applies to state action, true enough.  But “free speech” must mean something more than a bare minimum of “the government can’t arrest me for saying this.”

No, you don’t have to agree with someone who says something you don’t like.  And, of course, you’re just as free to voice a different opinion.  But once you start requiring that others either endorse / celebrate your view or “shut the hell up” we’ve entered dangerous territory.  This is especially true in the artistic realm, where expression (particularly humor) should be unfettered by restrictions placed by the most-easily offended among us.

If we live in a society where people are comfortable with crushing views different than their own—and likewise crushing those who espouse such views—we must also come to terms with the reality that such a society does not truly value open, honest discourse.

Or, at least, we must accept the reality that we’re now being controlled by the portion of our society that does not believe in that ideal.

Maybe a better path is to resist the narcissistic urge to silence views we don’t like.

Especially on a college campus or in a comedy club.

[1] The important proviso with these rights is, of course, that there may be a very limited set of circumstances in which the restrictions in play could satisfy what is called “strict scrutiny,” a very difficult legal test that courts apply in cases involving, e.g., fundamental rights or racial discrimination.  That’s a collateral issue for the purposes of this piece, and is generally beyond the scope of this article.

[2] As longtime readers know, I argue that “Washington Redskins” is not a racial slur, because, briefly, (1) the etymology of the word does not support such a conclusion, (2) the usage of the word is positive, not disparaging, and (3) the context in which the word is used is not racist.  I understand why people disagree, but that’s another topic that’s beyond the scope of this article.  Many, many, many more words on that subject (written by me) may be found here and here.

3 Responses to A “Free Speech” Misconception