On Olbermann last night, host Keith Olbermann delivered a powerful anti-“Redskins” commentary tied both to the team’s ill-advised #RedskinsPride hashtag campaign, as well as a recent discovery that the team’s name was not chosen partially to honor head coach “Lone Star” Dietz.  Olbermann cited the July 6, 1933 edition of the Hartford Courant, which included an AP report on the name change.  The AP quoted Marshall as saying:

So much confusion has been caused by our football team wearing the same name as the Boston National League baseball club, that a change appeared to be absolutely necessary.  The fact that we have in our head coach, Lone Star Dietz, an Indian, together with several Indian players, has not, as may be suspected, inspired me to select the name Redskins.

Olbermann, as is his unfortunate wont, then went on to declare that not only was the team not named to honor Dietz, but that anyone who persists in making the argument that the nickname is intended to honor Native Americans is either stupid or lying.

I should pause here to point out that the myriad, always-too-long articles I’ve written on the topic of the Redskins’ nickname here or elsewhere haven’t mentioned Dietz.  I’ve never seen the Dietz story as particularly important to the arguments I’ve made about the name, which revolve around the etymology of the word, the intent behind its usage, and the context in which the word is used and understood.  I simply don’t believe that the arguments on either side of this issue fail—or succeed—based on the Dietz connection.[1]

Having said that, I absolutely agree with Keith Olbermann that this discovery, contemporaneous with the 1933 name change, is relevant to the Dietz-related point that many others—including the team itself—have made in the past.

Naturally, I did some thinking about the origins of the name change.  Any die-hard Redskins fan knows the relationship to the Braves and Red Sox that Olbermann correctly highlighted.  I’m pretty sure I have a 25-year-old book collecting dust on a shelf somewhere that repeats much the same story.

But was the specific link to the players and coach of the team simply latter-day revisionism?  Was it a story cooked up to garner credibility and deflect criticism once people started to question the nickname at some point a few decades ago?

I decided to do a little research of my own.

I surfed over to a great website to which I subscribe called NewspaperArchive.com.  There, I began to unearth some of the reports on the team’s name change.  I couldn’t find the quote that Olbermann cited, but that’s only because NewspaperArchive doesn’t have a complete set of every newspaper in the country.  The Courant is one of the missing papers.

I did find a lot of newspaper accounts of the change, however.  Most of the reports I saw from July 6–8 were short, like the Courant account.  Many had no quotes at all.  For instance, the Lowell (MA) Sun said the following on page 2 of its July 6, 1933 edition: “BOSTON—George Marshall, owner of the Boston professional football team, changes its name from Braves to Redskins.”  That was also an AP report, but that represents the entirety of this particular version.  The UP account of the story was similar, appearing as part of a brief article on NFL expansion.  That piece also had no quotes.

Some of the reports were slightly longer and did have a quote from Marshall.  For example, on page 15 of the July 6, 1933 edition of the Salt Lake Tribune, the paper included what appears to be a nearly identical version of the story to the Courant version, except that the quote ends with “. . . absolutely necessary,” and does not include any of the language regarding Dietz or the players.

More interesting are a couple of reports on the name change that I found from a few days later. 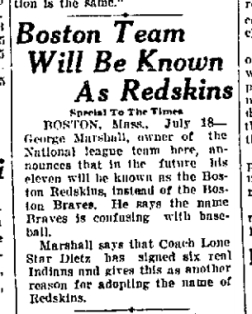 These articles are more fleshed out than the original AP wire story.  The shorter of the two is from the July 18, 1933 issue of the Portsmouth (OH) Times.  There, Marshall attributes the change in part to the confusion with the Braves, as he had when the original, shorter story appeared.  Here, though, the article also says directly that Marshall had stated that the team’s name change was connected specifically to Dietz, as well as to the Native Americans (calling them “six real Indians”) that the team had signed.

Again: This is July, 1933.  Just a matter of days after the date of the Courant quote, Marshall appears to be contradicting himself entirely.

Things get even more intriguing when we look at the Chester (PA) Times.  There, on page 10 of the July 18, 1933 edition, is a lengthy interview with George Preston Marshall himself, conducted by none other than Damon Runyon.[2] 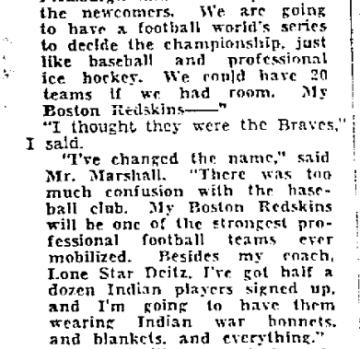 The interview is fascinating on a number of fronts, not the least of which is Marshall’s admittedly self-serving but nonetheless correct prediction that pro football would eventually be wildly popular.  He references massive expansion to the West Coast in the form of a “winter league,” as well as a huge championship event for professional football that would rival the World Series.

Runyon stops Marshall at one point, however, to ask him about the name change.

Marshall repeats the same line about name confusion as he had previously, but he immediately adds, “Besides my coach, Lone Star Deitz [sic], I’ve got half a dozen Indian players signed up, and I’m going to have them wearing Indian war bonnets, and blankets, and everything.”

Now, whatever else one might think of that quote when read with the perspective of someone living in 2014, it seems fairly clear that Marshall himself was tying one of the reasons for the name change directly to his coach, players, and Native Americans generally.

I think the question of whether the July 6 quote was an aberration or the “real” truth is an open one.  It’s possible that the quotes from a few days later were a post-hoc rationale, but the timing of such diametrically-opposed comments seems odd.  Over and above that, there is also some well-founded and (now) well-publicized skepticism about whether Dietz was even an actual Native American at all.

What is undeniable is that Marshall was connecting the name change to Dietz and Native American players before the newly-christened “Redskins” ever took the field.

[1] For example, although the team has cited the Dietz story in the past, last Friday’s Bruce Allen letter to Senator Harry Reid laid out several bullet points, none of which refer to or rely on the Dietz rationale.

[2] A PDF of the full Runyon interview with Marshall may be found here.