Have We Finally Lost It?

The first time I saw the snippet of the MAGA kid / Native American drummer video, my reaction was about the same as most other people’s.

“Somebody needs to teach him a lesson.”

“I hope the school punishes him.”

Now, some 12 or so hours later, my opinion on the matter is decidedly different.

This will be very unpopular, I know, but I think that the kid not only shouldn’t be expelled, but that his only offense is not de-escalating.

He should have backed up or walked away.  No question.  There’s a respect factor for elders that wasn’t in play there, and it should have been.  That’s something that should be addressed at once by his parents and the school.  I’m certainly not attempting to portray this kid as a hero.

While I don’t agree with the content of this tweet, the video is instructive.  It’s a longer cut than what we’ve seen on the news.  It shows the Native American protestors approaching the group of students, the students laughing and jumping in time with the music a bit, and the leader of the group, Nathan Phillips, walking up to the kid (who admittedly doesn’t budge).

But nothing happens.  No conflict.  No screaming.  No “surrounding” of the Native Americans.  Nothing.  Everyone actually seems to be in fairly good spirits.  I saw a half-dozen videos from the Women’s March today that were far more tense and confrontational.

Point blank: I think a lot of people still haven’t been able to wrap their minds around the fact that Donald Trump (for whom I did not vote) is president.   This, naturally, is an understatement.  They object to him on a personal and ideological level, and I’m not questioning the validity of those objections.  I share some of them.

But what I’m also saying is that many people are so obsessed and angry about Trump’s presidency that they bring that emotion with them when they view the video.  They see the young, affluent, white boys in MAGA hats and ascribe all the negative group characteristics therein to that gaggle of students.  That’s their starting point.

They see the smirk.  They see the refusal to move.  Instantly, this becomes something else in their minds.  It fits the pattern they need to see in the world, which is a perpetually regressive society packed with racists at every turn.  It’s the segregationist South revisited—and ubiquitous.  And, whereas I see a smirk, they see a physical attack. 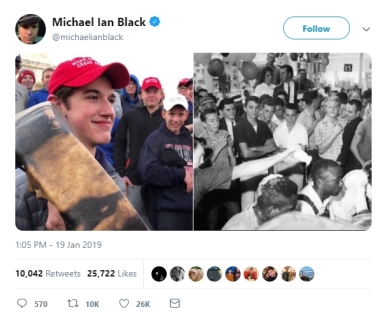 This, again, is the “two movies, one screen” phenomenon.  We are so charged up by our own preconceived notions that it is difficult—sometimes impossible—to absorb what we are actually seeing in front of us and achieve an escape velocity sufficient to extricate ourselves from confirmation bias.

People read the Washington Post account, for example, and accept it at face value (after the Post, in turn, has accepted Phillips’ account unquestioningly).  The New York Times says that the boys “mobbed” Phillips.  They accept these accounts because they fit their preconceived notions about how evil anyone wearing that hat must be.

Thus, when they watch the video, they see what is described above, and not actually what the footage shows.  And a teenage boy acting like a teenage boy suddenly becomes the leader of the Hitler Youth.  Factor in that he attends a religious, all-boys school, and that he has a tangential connection to the March for Life, and certain outlets or commentators become even more motivated to craft a particular, familiar narrative.

But there’s something else here beyond selective or decontextualized reporting.  There’s also an element that’s close to a mass delusion effect, created by the way we absorb information, particularly via social media.

To use a different example, I always think back to that Packers – Vikings playoff game in which Randy Moss pantomimed dropping his pants after he scored a touchdown for Minnesota in Green Bay.  Again, he didn’t actually drop his pants, he just made a gesture with his hands at his hips as if he were doing so.

However, Fox’s Joe Buck reacted so indignantly, calling it “disgusting” twice in the span of a few seconds, that not only did Fox not show the replay, but other networks wouldn’t show it for 24 hours—before the delusion finally wore off.

Today, that exact gesture is the thumbnail for the YouTube video.

Something similar is happening here, with high-profile celebrities openly calling for expulsion—or even violence—against the kids in the video.

Again, I’m not suggesting those kids didn’t act rowdy or even foolish.  But, if there’s no redemption to be had for high-school kids who do something silly or stupid, if people feel comfortable trying to dox minors because of a smirk, if the penalty for mildly dumb behavior should be permanent forfeiture of employment, then we’re probably already doomed.

I’d like to hold out hope.  But hope requires a lot more societal grace than is being extended tonight.

I’m left to wonder if we’re fresh out.

10 Responses to Have We Finally Lost It?