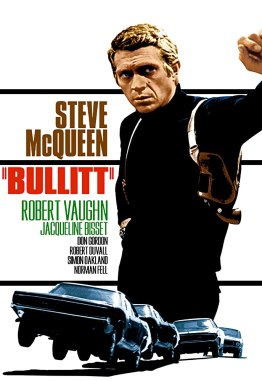 Bullitt, the next film in the Warner Brothers 50 Film Collection, is the perfect palate-cleanser after the fantastic but mystifying 2001: A Space Odyssey.

Rather than exploring existential questions of humanity and our place in the universe, Bullitt is quite simply an action-packed cop movie with superb editing, a little grit, and a tighter narrative.  It holds a 97 percent “fresh” rating on Rotten Tomatoes, which seems a tad high, but not absurdly so.

Bullitt stars Steve McQueen at his McQueen-est, along with Robert Vaughn and, in a small, but star-making turn, Jacqueline Bisset

One point it does share to some extent with 2001 is ambiguity.  While not aspiring to ask metaphysical questions of the sort that Kubrick’s masterpiece poses, Bullitt does leave viewers to ponder what the true motivations of some of the film’s characters were, particularly Robert Vaughn’s Senator Chalmers.

Specifically, the politically craven senator’s seeming indifference to the closing events of the movie causes the viewer to reconsider what Chalmers’ angle was from the outset, and where his loyalties actually lie.

It would be too harsh to say that Bullitt is a car chase in search of a movie, but the chase scene that takes place about halfway through the picture is so spectacular (particularly by 1968 standards) that it virtually overshadows the rest of the film.

In this respect, Bullitt reminds me a little of Ben-Hur.  These films could scarcely be more different in most ways, but, like the chariot race scene in Ben-Hur, the car chase in Bullitt is so awe-inspiring (and, at times, genuinely a bit frightening) that it’s sometimes difficult to think of anything else when reflecting on the movie in hindsight.

Unsurprisingly, Bullitt won the Academy Award for Best Editing on the strength of that scene, and deservedly so.  This was an era in which showing a dangerous, high-speed chase in and around San Francisco pretty much meant you actually had to do everything that made it to the screen, short of actually killing the people involved.

In fact, there are at least two shots during that chase scene that I have no idea how they were able to do, including the final shot.

Outside of the chase scene, Bullitt is a perfectly fine, enjoyable Steve McQueen vehicle that has enough twists to keep you interested for the entirety of its runtime.  It’s not quite neo-noir in my opinion, but it does have a lot of noir elements that were updated for a late 60s audience that make Bullitt worth revisiting.