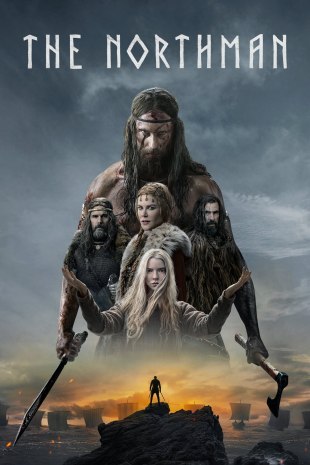 The last new film I reviewed was The Last Duel, and that was because I was so frustrated by how good the film could have been, had the filmmakers not made a few ill-fated storytelling choices.

I’m now moved to write about The Northman for the opposite reason.

The film is certainly well-made, acted, and directed—but probably not a film I’ll go out of my way to see again.  If I’m grading it, it might be a “B-minus” overall (for scale, I thought The Batman was at least a B-plus, and Lost City was probably around a C-minus or D-plus).  The Northman was a solid, worthwhile movie.

But what struck me was how unusual The Northman is.  This film does a lot of things that other movies do not, will not, or cannot do.  Director Robert Eggers made some strong choices that could have gotten him into trouble, figuratively and perhaps literally, but his skilled filmmaking deftly avoided those pitfalls.

First, the top-line points: The Northman is a tale of revenge and destiny with supernatural elements, as a son (Prince Amleth, played by Alexander Skarsgård) watches his uncle murder his father, the king, played by Ethan Hawke.  Amleth flees and vows to avenge his father, save his mother Queen Gudrun (Nicole Kidman), and kill his uncle Feng (Claes Bang).

Along the way, he joins a band of Vikings.  Years later, while in the land of the Rus, he discovers the whereabouts of his now-deposed uncle and his mother—and a way to infiltrate their village on a small island off of Iceland.  He poses as a slave, and he falls in love with a slavic girl, Olga (Anya Taylor-Joy), who is also among the slaves sent to his uncle’s land.  Ultimately, Amleth is successful, but at the willing cost of his own life.

It doesn’t sound particularly noteworthy, except that the tale is extremely tonally faithful to its source material, the legend of Amleth—specifically, the version of that tale recounted by Saxo Grammaticus, a 13th-century Danish historian, and not, surprisingly, a former kicker for the Arizona Cardinals.  The legend also forms the basis of some of the elements of Shakespeare’s Hamlet, so Bard aficionados may notice some similarities in the stories. 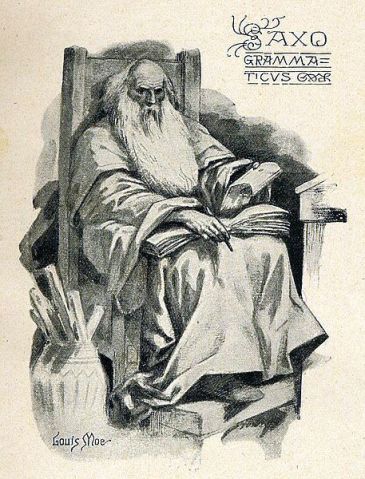 When I say “tonally faithful,” I mean that the film faithfully portrayal the brutality of how humans lived over 1,000 years ago.  That may not seem like much summarized succinctly, but it is very surprising to see a filmmaker make that choice in 2022.

This isn’t just “I’m surprised that someone can make a movie with an all-white cast in the era of wokeness” surprise.  That’s a part of it, but The Northman goes in much bolder directions than throwback casting choices.

Case-in-point: the unquestionable protagonist of the film commits or takes part in acts that modern sensibilities would identify as not only evil, but completely morally depraved.  This isn’t a complicated, Walter-White-style antihero who kills bad people sometimes out of survival or necessity.  This is someone who forms part of a Viking raiding party that invades and conquers a village, captures the strong among the survivors to be sold as slaves, and ushers the less-desirable children into a house to be locked inside and burned to death.

Again: this is the protagonist of the film.

Then, after arriving at his uncle’s home, Amleth, posing as a slave, secretly commits acts of violence against even innocent people who just happen to work for his uncle.  These acts are intentionally horrifying and cruel, designed to psychologically torture his uncle and his family and charges.

To cite one example, Amleth murders several people under cover of night, then takes the time to mutilate and arrange their remains into the shape of a horse (I think), which he somehow has time to affix to the side of a house before dawn, so that it can be discovered the next day and shock all who see it.

An even more glaring example is the fact that slavery plays a major role this movie, but there is never any kind of explicit anti-slavery commentary.  The film simply depicts slavery as part of the reality in which the characters live.  No one stops to give a speech / lecture to the other characters about how immoral it is, nor is there any indication whatsoever that Amleth—again, the hero—is opposed to slavery in any way.  He does free his uncle’s slaves as the deposed king’s grip on them slips away, but never does he indicate he’s doing so for any reason other than revenge against his uncle.

I’m mentioning all of this because I genuinely appreciated it.

For many people born in, say, 1995, the world of just 30-40 years ago seems peculiar, perhaps even backwards.  This generational myopia stems largely from narcissism, but let’s put that value judgment aside for a moment.  For argument’s sake, let’s say that the underlying criticism is valid.

We see that idea expressed in nearly every movie or television show set in the distinct past.  It used to be that a story would need to be set in, say, the 1960s South or even earlier to illustrate this kind of contrast.  As we’ve moved forward in time in real life, the “grace period” has gotten shorter and shorter.

Today, nearly any movie or show set before the Obama Era would have to go out of its way to ham-handedly yell at the audience about how ignorant people were way back in, I don’t know, 1981 or 1994 or even 2003.  Just watch any SNL sketch set prior to present day to see what I mean.

My point is that, if these folks are even remotely correct about how disturbing society was even three decades ago, it stands to reason that we’ve completely lost sight of just how absolutely brutal humans were even 200 years ago.  Almost all humans.  Not just “disfavored” groups.

Thus, if you’re thinking about how “cringe” comedy was in, e.g., the 1980s, or how backwards social policy was in the 1950s, or how ashamed you are of the United States at pretty much any moment in history—including now—just think about how awful things must have been in 1607 or 1492 or before the year 1,000.

If you can’t process how any rational person could possibly find certain things we did just 10 years ago acceptable, how about 10 centuries ago?

That’s what makes The Northman so interesting.  It entirely appropriately conveys this ancient story in the way that it would have been understood by an audience in 1000 A.D. or 1200 A.D. or 1400 A.D.  Namely, an audience for whom slavery and brutality and conquest would have seemed entirely normal, or at least familiar.

In case there’s any lingering question about whether the film is inserting contemporary moral sensibilities, the film ends with Amleth—the same one who killed countless people, including multiple members of his own family—literally ascending into Nordic heaven (Valhalla).

This choice by The Northman is the missing ingredient that would have made The Last Duel a great film.

I won’t re-hash all of that, but The Last Duel also takes place hundreds of years ago, albeit in a slightly more civilized age than The Northman.  There, however, the filmmakers can’t stop beating the audience over the head with the “can you believe how backwards these people were?” tropes.

The Northman, correctly, dispenses with all of that nonsense.  Surprisingly, it has fared well with critics, currently sitting at 89 percent on Rotten Tomatoes, even higher than The Last Duel‘s 85.

Unsurprisingly, this score is significantly higher than the audience rating of 63 percent—an understandable gap, since the brutality of the film will certainly not be for everyone.

Although I never need to see the film again, I genuinely appreciate the vision and execution (no pun intended) of The Northman.  Tonally and visually, Eggers took a big swing, and he connected.