30 Rock pulled off the win last week with an episode that was as much about setting the table for its final season as it was delivering laughs (it did both).  The Office had an “off” week after a strong opening to its own final year the previous episode.

With Liz Lemon and company drawing first blood, will Dunder-Mifflin be able to rally to tie things up?  Or will 30 Rock continue to prevail in a rivalry it’s dominated over the last two seasons?

Tonight’s Episode: Jack and Liz continue their efforts to tank NBC, but find that agenda at odds with other aspects of their lives. Kenneth’s family visits.

Good Stuff: Paul Ryan dropping out of the race because it turns out he was born in Kenya . . . (long pause) “…not a lot we could say about that one” . . . Jack’s tanking plan including the following this week: A Sunday Night Football schedule populated exclusively by Cleveland Browns games, Jimmy Fallon using his real voice, and Black Hitler sketches on TGS . . . “The show’s not going to phone itself in” . . . Jenna called Pete “Mr. Clean’s gay uncle” in front of his kids . . . “You look like someone’s been slowly poisoning Sally Field” . . . The FBI blamed Jenna’s song for a spike in summer sex crimes . . . “Then I would have seen Criss’ muscular back….” . . . “The only celebrity I ever met was Evel Kinevel’s motorcycle…and that was just a picture” . . . “NBC.com had over a HUNDRED hits today!” . . . “…just like BP did, when they heroically tried to lubricate the Gulf of Mexico!” . . . Cerie sighting . . . “You’re supposed to say ‘brava’ to a woman.” “Oh, I am well aware of that.” . . . “Did you hear that? That’s the sound of ‘Honey Boo Boos’ piling up on your TiVo” . . . “Look, Ken…I’m just tryin’ to replace your dad…aw, dang it…that’s the wrong thing to say, isn’t it?” . . . Pete’s sex strategy . . . “HEY! That was ten dollars!” . . . “Do you remember that kid in school who bullied you? Well, I ATE that goat” . . . “Break a leg, Tray!” “That shouldn’t be hard. I have a severe calcium deficiency.”

Non-good Stuff: The Romney horse joke was a little obvious . . . The Liz being turned on by organizing stuff didn’t really do it for me. A little too weird-weird, and not weird-funny . . . I think we’ve had one too many “Jenna referencing a specific athlete’s penis” bits over the years” . . . Using the name “Dunston” for the black, Southern, Republican governor was an interesting choice.

Line of the Night: “Well, after 2008, I went back to being a lobbyist. You know, just hanging out in hotel lobbies. If you wear a red vest, sometimes people think you’re a valet, and you can take a nap in their car.” – Cooter Burger

Overall: I liked the main plot, as well as the Kenneth story, but the Liz / Criss portion was hit-or-miss.  Not bad, but, like the Hazel stuff last week, it skewed a little too far away from “weird-funny” territory and into the “weird, but not that funny” realm.  In general, though, there were a lot of good lines and bits this week, and O’Hara and Cranston were strong guest stars.  The episode started off very strong and leveled off, but this was still a step up from last week’s decent show.  A good effort, especially considering the time-sensitive nature of the primary story.

Tonight’s Episode: Republican and Democratic candidates for the second-highest office in the executive branch discuss and debate their ideas for governance in this special live episode.

Good Stuff: All the water glasses with “CENTRE” on the side of each one . . . The point about small business taxes was decent . . . That’s about it.

Non-good Stuff: The first question was about Libya, and Biden immediately talked about Iraq and Afghanistan . . . “These guys bet against America all the time” . . . Values. Values. Values. We get it . . . The fact that Iran doesn’t have a delivery system for a nuke sort of misses the point . . . Breaking new ground with the “Wall Street / Main Street” bit . . . Pretty sure Ryan knows that the Romney plan math may not work . . . Looking straight into the camera and asking questions of people at home is weird . . . I still don’t like the “pay more” or “pay less” language in regard to taxes. The proportion of tax receipts paid by the wealthiest American’s went up after the Bush tax cut . . . Ryan uses a trick I use myself sometimes when I want to change the subject: He uses a phrase that indicates something really important is about to be stated as a diversionary tactic. For example, “Here’s the point . . .” Personally, I like “The bottom line is . . .”

Line of the Night: “I think the Vice President very well knows that sometimes the words don’t come out of your mouth the right way.” – The guy on the right of the split-screen

Overall: There were some funny moments sprinkled throughout, but this episode desperately needed more Dwight.  I don’t remember Creed at all.  That’s two weeks in a row where he’s had little-to-nothing to do.  And I still felt like the episode was too focused on Nellie.  Having said all that, I do applaud them for sticking their collective neck out and trying something different in their final season. 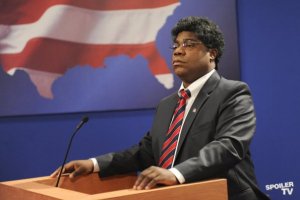 Final Thoughts: The Office continues kind of a rough streak, as I barely laughed even once.  Doing a live episode also seemed desperate (not to mention derivative of 30 Rock).  And did it really need to be ninety minutes?!?  Still, the episode was not without merit.  Nonetheless, 30 Rock wins hands-down this time around.