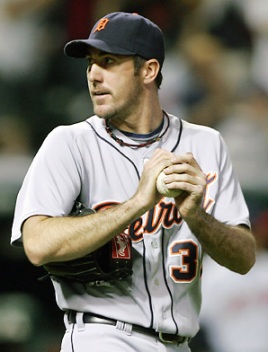 The news last week that local athlete Justin Verlander had signed the most lucrative contract of any pitcher in the history of baseball met with praise and pride in the Central Virginia area.  The deal, valued at up to $202 million if an eighth year of the contract vests, prompted congratulations from most of the folks who weighed in online in response to the story.

Unfortunately, this being 2013, there was also a sizable contingent who had a very different take on the record-setting deal.  Here are some helpful examples in the form of comments posted on the local news stories related to the contract, along with my even-more-helpful responses:

Nobody is worth that much $, especially a ball player!! What about our servicemen, police, teachers???

They aren’t worth as much.  Justin Verlander has a unique skill set.  He does something very specific better than anyone in the world.  How many people on Earth can be MLB pitchers?  A few hundred.  And, of those, Verlander is the best, or at least one of the five best.  How many people in the world could potentially be teachers, soldiers, or police?  A few hundred million.  If not more.

Verlander is also a revenue-generator on a level that teachers, soldiers, or police, individually, never are.  On top of that, Verlander is paid by a private-sector organization, while soldiers, police, and non-private-school teachers (which is to say, most of them) are paid by the government using taxpayer funds.

Yes, let’s forget our teachers, firemen, police officers, men and women who fight for their country. Let’s just make sure these athletes and movie stars get gazillion of dollars. Because they are so talented and are worth every penny. Forget all the poverty around us. As long as they make millions, all is good. There should be a cap on what any individual or company can make in profit. The rest should be going back into making this world a better place.  It’s all about greed. Nobody needs this kind of money. Nobody!!

I could launch into a lengthy political diatribe about the benefits of a free market, blah, blah, blah, but, instead, I will spare everyone and simply suggest that this person kindly go return to Mother Russia circa 1983.

202 Million dollars over 8 years. I could think of of several schools that could use a third of those funds over 10 years to do far more than what this man (no doubt a great guy) will do for this baseball team in his 8 glorious years. Where have our priorities gone?

Who’s the “our” in that sentence?  A lot of us like baseball.  I like baseball.  Yet, I spend less on baseball every year than I (involuntarily) do on property taxes.  Those property taxes go to pay for those aforementioned schools (and to pay the salaries of those hero school teachers referenced earlier).  But I have no children, much less children in public school.  And I have no complaint about that.

So, in short, shut the hell up, and stop confusing government priorities with a private businessman paying a great baseball player a lot of money.

Dang…that is sickening..are economy is going to hell, people everywhere are struggling to survive and this guy is going to make 202 million dollars for throwing a baseball. Why are we making these sports stars rich agian when most of us can hardly make it?

Who’s the “are” in that sentence?  Anyway, to answer your question: Because people like you are funneling money, five hot-and-ready dollars at a time, toward buying Little Ceasar’s Pizza.  You use your grubby little fingers to stuff your fat face with that pizza, which, in turn, gives Mike Ilitch, a first-generation immigrant and self-made billionaire, a little more cash with which to pay the baseball players on the team that he owns.  Oh, and also because of the wild popularity of baseball.  There’s also that.

Again, no person needs this kind of money. Especially because you can throw a ball. I’m not wishing this man or his family any harm, it’s just we have our priorities wrong. If these clubs are making so much money, how about charging the fans less to get in?

Do these morons believe that there’s a 1:1 relationship between the moral value added to a society by a person and the amount by which they’re compensated?  How much does a clergyman or the manager of a non-profit make vs. a successful used-car salesman?  These people are wayyyy too hung up on the notion that baseball players shouldn’t make a lot of money because baseball is “a game.”  You know what’s also a game?  Checkers.  And checkers players don’t make millions of dollars per year.  Why?  Because people don’t show up by the tens of thousands to pay to watch people play checkers.  So, it’s not the game part that’s important.  It’s the willingness of people to pay to see the game.  This could not be a more basic concept.

that’s stupid! thats why i don’t watch baseball, nobody worth that much money. then if he does something like Michael Vick did with the dogs, they take away the salary away.

I wish you the speediest of recoveries from your head injury.

Shows you what a cock-eyed value system we have in place. Is what he does more valuable that what a good teacher does? Is he going to teach your kids to read or write? Sure he has a skill. but it benefits nobody but him. Maybe he’ll fund some deserving teachers raise with it. Bah!

I said this on my last podcast, but it’s worth repeating: Not all teachers are heroes.  A few are.  Teachers are generally (but not always) people who went to fair-to-middling diploma mills, who enjoy (or can tolerate) being around kids, and who want three months off per year (plus holidays).  That’s not a bad thing.  I in no way begrudge them that.  But let’s not confuse that with something worthy of canonization.  And I say that as the son of two public-school teachers.

More to the point, Verlander will pay more in taxes in one year (and fund more teachers with that money) than this person will in his entire life.  So, there’s that.

The money we as consumers are spending on sports is what makes it possible for these companies to pay these athletes these outrageous salaries. It’s the countries screwed up thinking I am talking about. Just think what we as a nation could do it we were putting our money into charities and research.

I agree.  No one should enjoy recreation or entertainment, ever.  Because there are always more important things than entertainment.  In fact, I spent a whopping EIGHT HOURS last night just sleeping.  That’s valuable time I could have spent doing charity work or research!

The earnings are proportional to the revenues of the team.  I’m sorry that someone making so much money makes you uncomfortable with your crummy life, but, really, why should you care?

So baseball player Verlander “deserves” $180 million? Has he saved lives? Taught children to read or defended our country? How does some who plays a GAME deserve that much money? What an asinine statement.

Because the amount of money he gets isn’t determined by some moral authority, it is determined by the revenues the team has and his relative performance contribution to the team, both of which are substantial.

First, there’s a fundamental misunderstanding of economics.  The holy trinity of teachers, soldiers, and police/fire personnel are not broadly subject to the same free-market forces as are professional athletes.  Moreover, no one anywhere is compensated based on some imaginary moral pay schedule that rewards a subjective “value to society” metric.

Second, and more importantly, there is the underlying jealousy and resentment of success that emanates from every pore of the entitled and morally righteous.  The “nobody should be paid that much for playing baseball . . .” refrain is followed by an unspoken “. . . because I only make $XX,000 per year at my crappy job!”

The issue is that people in contemporary society can’t seem to wrap their minds around the fact that some people are hyper-talented while they, themselves, are not.  People who make more money than they do must be greedy and morally inferior, right?  After all, they’ve grown up in a world that tells them that everyone is special.  So, how can it be that a guy who plays a child’s game makes more money in a week than they will in a year?

Because Justin Verlander is special.  He has worked all his life to hone his considerable natural talents into even more-refined abilities.  He also plays a sport that rakes in mountains of cash.  Were it not for both of those facts, we wouldn’t be having this discussion.

So, to Justin Verlander, I say congratulations.  Congratulations on being the best in your profession, for being truly exceptional, and for being compensated in a way that is in line with your level of success.

To those who object to someone else making that much money, I say the following: Verlander’s salary in no way impacts your mediocre-to-bad bottom line.  What does impact it is the fact that, unlike Verlander, you aren’t great at what you do.  If you were as special as he is, you would have risen to the top of your profession as he has done.

Despite the fact that you need to tell yourself that you contribute something to society, you probably don’t.  Your unexpected and sudden death would be remembered by a few close friends and loved ones at best.  You would be replaced easily in whatever your chosen profession is, and the transition would be almost instantaneous.

Someday, if you live long enough, you may contribute something directly to society.  I imagine this taking the form of a “Soylent Green”-esque scenario in which you are ground up into a nutritious paste that helps provide sustenance to your fellow citizens.

Then, perhaps, it could be said that you were a contributor.