In accordance with the plan I laid out a few weeks back, I now resume my survey of the Warner Bros. 50 Film Collection.  I’ve made good on my word to power through the rest of it, and, as of this writing, I only have two left to watch.  But, I still have to write about each of the films.  Thus, here is a rundown of the movies from the collection that cover 1989 through 1994:

Driving Miss Daisy (1989): Showing this film to the median 25-year-old in 2022 would be an interesting exercise.  This movie depicts what most of us in the 80s and 90s believed to be a positive, hopeful representation of race relations, but today would likely be mocked or sharply criticized as naïve or condescending or worse.  I’m not convinced that this shift is “progress.”  Still, contemporary critics and the Twitterati would almost certainly pillory Morgan Freeman’s Hoke as demeaning or servile—even though that’s sort-of the point!  In 1989, though, critics loved it, and the Academy honored it with a boatload of nominations, including Jessica Tandy becoming the oldest Best Actress winner, and Dan Aykroyd(!!!) getting a nomination for Best Supporting Actor.  To date, it’s the last PG-rated movie to win Best Picture.  For me personally, it’s fine, if a bit paint-by-numbers.  It’s certainly better than some of the other films you’ll read about in a moment, although it’s probably one of the weaker Best Picture winners.  The only thing that I actively disliked about Driving Miss Daisy was that I found it implausible that a backwoods highway patrolman would instantly identify the rather uncommon surname “Werthan” as Jewish.

Goodfellas (1990):  Here’s where I drift in to heretical territory.  Goodfellas is undoubtedly a strong movie.  Let me say that at the outset.  Excellent performances abound, including the best of Ray Liotta’s career.  Here comes the “but.”  But, I think Casino is actually a better version of this type of film.  Goodfellas has some of the hallmark “Scorcese”-isms, including requiring a voiceover to drive the plot, and having some scenes that clearly include partial improvisation, but Casino handles both of these elements better.  Goodfellas gets credit for coming first, but Casino took much the same formula and smoothed out some of the rougher edges.  On the other hand, the rough edges are part of what so many people like about Goodfellas.  For me, it’s a good movie that’s plagued a bit by the eternal “book-based-on-a-movie” challenge, where time leaps and glossing-over are necessary to fit the story within a three-hour window.  But I don’t want it to sound like I don’t think Goodfellas is good.  I absolutely do.  I just wouldn’t put it in my top three of Scorcese’s movies—which is as much a testament to his work as it is to my opinion of Goodfellas. END_OF_DOCUMENT_TOKEN_TO_BE_REPLACED

Way back in 2014, I set out to review every film in the Warner Bros. 50 Film Collection.  I did great at first!  However, as the years (and responsibilities) piled up, this vow soon became an impediment to completing this formerly joyous task.

Instead of plowing through the collection the way I would binge-watch, say, Community, I found myself delaying the process because I knew that each entry would require a lengthy review on this humble blog.  In fact, I’ve actually recently watched three of these films that I haven’t even reviewed yet!

END_OF_DOCUMENT_TOKEN_TO_BE_REPLACED

The Last Duel, Ridley Scott’s latest effort, has much to like.  The cinematography is very strong.  The focus on the legal norms of the day, including the loophole of sorts exploited to arrive at the duel itself, is highly interesting.  The action scenes are excellent.  In particular, the titular duel is so well-choreographed that I actually wasn’t entirely sure who was going to win at one point.

The problem was that, by that time, I barely cared.

The Last Duel has a structure that will be familiar to anyone who grew up with 1980s television.

The story comes in three “chapters,” each of which represent the respective point of view of the three main characters, played by Matt Damon, Adam Driver, and Jodie Comer—in that order.  Now, as anyone who experienced that 80s TV trope can tell you, the whole point of this form of storytelling is to show that each person has a slightly different perspective on the same events (and also to give a break to writers who had to crank out 22 episodes’ worth of “WHATCHOOTALKINBOUTWILLIS?” jokes).

This technique can be used to highlight the more humorous personality traits of the characters, each of whom normally makes himself the singular hero of the same story.  In terms of drama—and this is key—it can be used to show nuanced versions of the same event to get the audience to try to decide what objective reality might be.

Often, that reality can mean some mid-point among all of the versions.  Or, the creator might leave it to the audience to debate and decide which is the actual “correct” story is, perhaps picking up on consistent threads in the various versions to separate fact from embellishment.  This can be a captivating storytelling device when used correctly.

That isn’t what happens in The Last Duel.

END_OF_DOCUMENT_TOKEN_TO_BE_REPLACED

If you saw Full Metal Jacket years ago, or you’ve only watched a few key scenes on YouTube, you probably love the movie.  Or, you think you do, anyway. 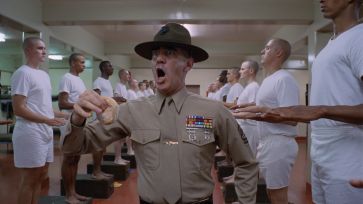 If it’s been a while since you’ve seen it, it may come as some surprise that Full Metal Jacket is part of a sub-set of films that include an iconic first portion, followed by a middling or flawed remainder that nobody really remembers because oh my God that first part!  Other examples might include Stripes or Superbad, not that those films are anything like FMJ.  Nor are they part of the Warner Bros. 50 Film Collection.

The first 45 minutes of Full Metal Jacket is virtually an extended montage scene, save for two voiceovers by Private Joker (Matthew Modine), which provide some cover exposition to allow the audience to understand how much time has passed.  Those 45 minutes are absolutely riveting, as Drill Sergeant Hartman (R. Lee Ermey) whips young Marines into shape in preparation for the horrors of Vietnam.

END_OF_DOCUMENT_TOKEN_TO_BE_REPLACED

NCAA Football without the “NCAA”

Seems like a good time to re-up this piece in 2013, which, in turn, was based on a law-school paper I wrote predicting the NCAA’s ultimate defeat in preventing players from profiting from their name, image, and likeness.

The Axis of Ego

NCAA Football, long a staple of the EA Sports gaming line-up, will cease to exist after the current version—a least under that name.

The NCAA announced yesterday that it would not renew its long-standing licensing deal with Electronic Arts.  An agreement between the two parties has existed in some form for 20 years.  The reason for the change is fairly simple: The Ed O’Bannon lawsuit creates huge potential liability for the NCAA.  Should a court rule that the organization must compensate athletes for the use of their likenesses, the NCAA could be on the hook for millions upon millions of dollars, depending on where the “line” is drawn for damages in terms of timing and the size of the class eligible for recovery.

Naturally, the NCAA says that “We are confident in our legal position regarding the use of our trademarks in video games.  But, given the current business… 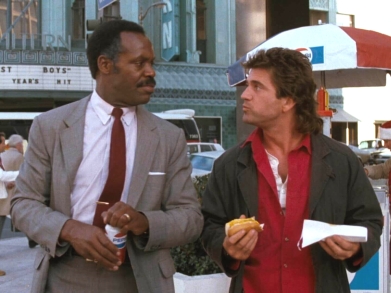 The next stop in my meandering, years-long journey through the Warner Bros. 50 Film Collection is Lethal Weapon, a film that walks a thin line between wildly entertaining (if absurd) action movie and borderline-self-parody buddy-cop trope-fest.  Man, that was a lot of hyphens.

Hindsight blurs that line, as retrospective eyes make elements that were still fresh in 1987 seem like hopeless clichés.  As with any historical work or figure, I judge it in the context of the times in which it existed.  As such, Lethal Weapon holds up better than one might reasonably expect.

END_OF_DOCUMENT_TOKEN_TO_BE_REPLACED

The Color Purple has the distinction of being the most-nominated film not to win an Oscar.  The 1985 adaptation of the Alice Walker novel earned an impressive 11 nominations, but failed to win a single Academy Award, tying the record held by mostly-forgotten 1977 ballet drama The Turning Point.

Watching The Color Purple for the first time, it was easy for me to see why it earned such critical acclaim.  It tackled topics that would have filled most Academy voters’ bingo cards: rape, incest, pervasive abuse, more rape, forbidden sexuality, a hard-but-brief detour into racism, and female empowerment.

Yet, the film suffers from the same structural challenges that plague many other movies based on books, whether Gone with the Wind or Doctor Zhivago.  Namely, there is simultaneously too much and too little: we get a story in the form of snapshots, jumping from era to era at an almost-breakneck pace, but without some of the detail that surely fleshed-out the novel (which, unsurprisingly, I haven’t read).

END_OF_DOCUMENT_TOKEN_TO_BE_REPLACED

There are two vital pieces of insight I’ve learned about Amadeus in the years since I first saw it.

The first was Milos Forman’s observation that the film had not two brilliant stars, but three: F. Murray Abraham, Tom Hulce, and the music.

In a way, this is a bit of a cheat, as the music in question had existed for hundreds of years before the play or movie ever existed.  The “standing-on-the-shoulders-of-giants” concerns can be swept aside in light of the scope and presentation of that music by Forman—both in terms of the actual staging of the large, operatic and orchestral scenes, as well as the depiction of the creative process itself.

END_OF_DOCUMENT_TOKEN_TO_BE_REPLACED

Still, I can’t quite get over the late-season swoon by my beliked(?) Richmond Spiders.  This turned out to be the most disappointing season of my lifetime, as several brushes with COVID-19 derailed most of the momentum that the senior-laden team had coming off of a strong 24-7 campaign.  I can only hope that they somehow win the NIT Tournament—a tournament I didn’t realize was happening until 48 hours before tipoff!

Three wins to go as of this writing.  Go Spiders!

As for the Big Dance, I based everything on the idea that Gonzaga is clearly the best team in the country (they’re undefeated and have won all but one game by double-digits), but that nobody can go undefeated in today’s game.  Therefore, Baylor (or, more likely, someone I didn’t pick) will knock off the Zags before they complete the task.  If that powerhouse Kentucky team of a few years ago couldn’t do it, it seems like the odds are against it, even if Gonzaga is the clear favorite, if that makes sense.

Look, I’m seconds away from getting into an explanation of probability and “The Monty Hall Problem,” and nobody wants that.  Let’s end it here.  Laugh away: 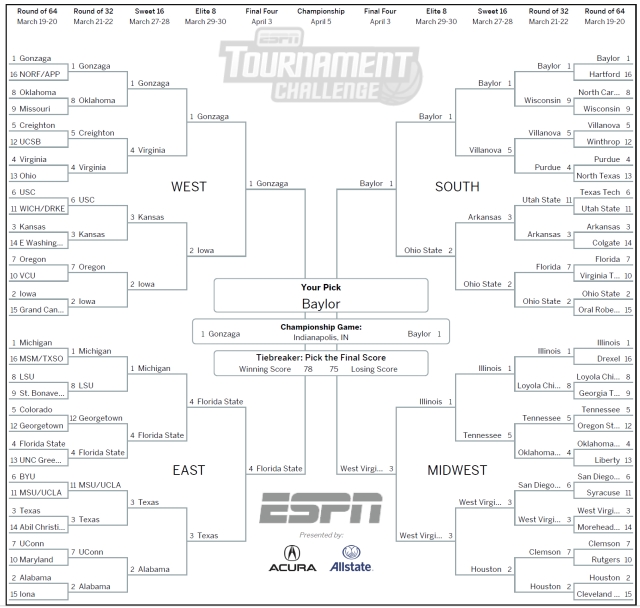 And, so, the first (and, presumably, only) season of WandaVision came to a conclusion with Episode 9, “The Series Finale.”  Before I get into the spoiler-y bits, let me recap the key finale expectations I had after last week’s episode.  They were as follows:

1. A segue into Multiverse of Madness, possibly with a Dr. Strange cameo (or at least a reference).
2. A definitive answer about why Quicksilver looks like that.
3. A definitive answer as to Vision’s fate.
4. The destruction of the Hex and the restoration of Westview.
5. A non-definitive answer as to Wanda’s good / bad alignment, possibly including her killing Hayward.
6. Agatha, a natural tweener, winds up on the side of “good” by the end of the episode in an effort to contain Wanda.
7. REED RICHARDS (or, in a swerve, Victor Von Doom)
8. A fully-powered Monica / Spectrum.
9. An hour-long episode, or close to it.

How’d we do?  Well, if you’ve watched the episode already, you know.