I happened to peruse a New York Times article about Jimmer Fredette’s prospects as a professional basketball player this week.  I don’t normally read much sports coverage from the NYT, so twice in one week is noteworthy. 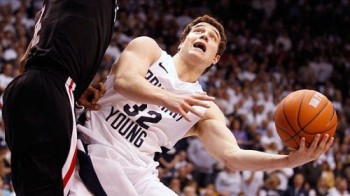 In this case, the article itself was fine.  What caught my attention was the way in which the various unnamed NBA front office sources assessed Jimmer and his chances of success at the professional level.  Here are a few portions of the article that speak to this point, along with my translated version of same:

– Interviews with a half-dozen N.B.A. scouts and front-office personnel provide a portrait of Fredette as a professional prospect. He is generally considered offensively gifted, defensively challenged and destined to be a solid rotation player in the N.B.A.

Translation: He is generally considered to be exactly the same player as every highly-touted, sub-six-foot-ten white guy to come out of college basketball in the last two decades.

– “He’ll be a guy who is a better Steve Kerr, a better Kyle Korver.  A better Kapono.  Both those guys can’t put the ball on the floor.”

Translation: He’ll be like those other white guys we just named.  Perhaps he’ll be a better, but equally-white version of them.  Did I mention they’re all white?  I bring that up because I literally can’t think of a way to compare a good, white college basketball player to a non-white NBA player.

– “He will need to go to a team that is either stacked with good defenders or a team that doesn’t emphasize defense.  For as sharp a shooter as he is, he’s just as bad of a defender.”

– The N.B.A. personnel said they expected the Utah Jazz, which should pick around No. 12, to feel pressure to draft Fredette.  If it does not, few expect him to slip lower than No. 20.

Translation: We’re running out of euphemisms to point out our perception of Jimmer’s painful whiteness, so let me put it another way – the Utah Jazz will really feel a lot of pressure to draft him, if you know what I mean (WINK).  And the Mormon thing is like a white-double-whammy.  I wouldn’t want to be in Utah’s shoes and/or sacred undergarments come draft time.  If the Jazz don’t take him (and the only way that’s possible is if they trade the pick for another player.  Someone like, I don’t know – let’s say Kirk Hinrich), I expect Jimmer to fall to #20 or so.  Keep in mind that this will be one of the weakest draft classes in memory, so being #20 in this year’s draft is equivalent to being a borderline second-rounder in other seasons.

Translation: We’re not falling for it.  That alleged “36-inch” jump must have been performed at high altitude, where the earth’s gravitational pull isn’t quite as strong.  Or, maybe there’s some kind of “Mormon Metric System” that uses different standard units of measure.  Either way, I know my organization can’t afford to take that chance in the first round.  Would you?  I mean, you know he’s a 6-foot-2 white guy, right?