The Worst Commercial on Television

I’ve written and spoken often about my concerns regarding the social norms of younger Americans.  There’s a fairly stark line of demarcation between those who made it through their formative years without the influence of the internet and social media, and those who were already texting and e-mailing before they were out of puberty (which more or less covers most of the current population under 30, and certainly those under 25).

I saw a commercial recently which not only underscored my preexisting fears, but fostered new ones.  Here it is:

To recap: There’s a nice family dinner in progress.  A soft-spoken, late-middle-aged woman begins to tell a story about shopping at the market for items related to her now-aged pet cats.

A girl in her late teens or early 20s is sitting right next to the older woman who is speaking.  The young woman listens to this story for approximately seven seconds before pulling out her smartphone and browsing pictures on Facebook Home, the new Facebook-centric interface for Android devices.  As she flips through those pictures, the moments captured therein come to life in the dining room, drowning out the older woman telling the story.

Finally, you young people no longer have to listen to the blah, blah, blah of your elders.  The next iteration of Mr. Zuckerberg’s magical invention has arrived to spare you from such a lamentable fate.  This is your world, and other humans—especially old, gross, boring humans—are merely annoyances who should obviously be ignored until such time as they become useful (e.g. when they’re giving you money to buy a new smartphone).

The idea that you might—OH MY GOD—have to listen to someone else tell a story that’s only interesting to them is just sickening!  I mean, what are you getting out of this insipid tale?

Why should you ever have to do anything that isn’t fun?  Especially when, again, you’re not getting any money for it!

So, who the hell cares if she’s sitting right next to you?  Screw her!  Get that phone out.  Doesn’t she know she’s totally boring, and, um, old?  Ugh.  Just die already!

Besides, it’s been at least five minutes since you checked Facebook.  Like, I know that you have notifications that pop up anytime something happens on your page, but this is serious!  You shouldn’t have to do anything that makes others happy unless it makes you happy!  Be true to yourself!  You’re number one!

You see all those adults in the commercial who are politely listening to this woman drone on about her cats (i.e. her only companions)?  Do you see these people?  The ones dutifully suffering through the story, some even charitably smiling?

Well, I have a name for people like that: Suckers.

One day, just a few years from now, we’ll live in a better world—dare I say, a utopia—where everyone at that table will immediately whip out their smartphones and begin browsing pictures or writing witty status updates as soon as someone starts saying anything that doesn’t interest them.  I’m getting a bit misty just thinking about that idyllic future.  Of course, I’m not sure who will cook the food or whatever, since that’s totally a pain.  But they can probably pay someone to do it or something . . .

The protagonists are the family members, who, despite being less-than-thrilled to hear the story, don’t react in the rudest way possible.  Because that’s what you’re supposed to do: They listen to the story, even though it may not be as interesting as looking at pictures of themselves or their friends.  They listen to the story because having the basic respect to listen means something to a family member.

I go visit my grandmother at least once every couple of weeks.  She’s 99 years old.  Ninety-nine.  We sit and talk for an hour or two.  There’s not much common ground between our current life experiences.  In fact, very few ninety-nine-year-olds have a current life experience.  But our lack of common ground is irrelevant.  We make the conversation work.  Sometimes she tells stories that are objectively uninteresting to me.  Sometimes she tells stories that I’ve heard before.

I don’t do it because I’m some kind of hero.  I’m not insinuating that I am.  There’s nothing special about behaving this way.  This is simply the way people in a polite society are supposed to behave.  Or, at least, it used to be.

To be blunt: This is the worst commercial on television.  Not one of the worst.  The worst.  And I say that in full acknowledgement that it’s a beautiful, brilliantly-produced piece of short film-making with outstanding effects and visuals.

It is not poorly-written.  It is not confusing.  It is not insulting to the intelligence, as so many commercials are.  From a technical standpoint, it is outstanding.

But not one bit of that matters.

Why?  Because the unmistakable message of the ad is that people who are polite to their elders, people who aren’t self-absorbed enough to tune out during a family dinner, people who have common decency—are utter fools.

And someone who thinks a trip to the grocery store is interesting (because it’s probably the highlight of her week)?  Loser.  Old.  Deserves to be ignored.  It’s her own fault for being boring. 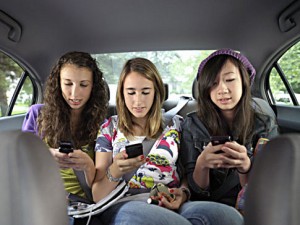 Interacting directly is SO twentieth century

Technological advances often have unintended consequences.  Elements as revolutionary as social media and ubiquitous internet access were bound to have more than a few such consequences.  I understand that the very nature of social media meant that it would spawn at least some additional cultural baggage.  To an extent, that’s unavoidable.

But can Zuckerberg and company do us all a favor and not dump gasoline on those wildly narcissistic flames?

It’s not too late to alter course and roll back some of the elements in this swell society we’re crafting.  But we’re all staring so intently at our pretty little touchscreens that I’m not even sure we hear the clock ticking.

6 Responses to The Worst Commercial on Television