Some friends of mine run a blog called The Culturephiles, a link to which may be found on the right sidebar of this site.  The aims of that blog are not entirely dissimilar to those in play here.  The primary difference being that the Culturephiles are admittedly far better-read than I am.

That’s an understatement.  This is a blog that featured “30 Days of Flannery O’Connor” at the end of 2010.  A fresh review of The Known World by Edward P. Jones included the gibberish-to-me line, “In some ways, this book reminded me of Marilynne Robinson’s Gilead . . .”  Other recent takes have included All the Sad Young Literary Men by Keith Gessen, Freedom by Jonathan Franzen, The Sot-Weed Factor by John Barth, Zeitoun by Dave Eggers, and something called Snow by someone called Orhan Pamuk.

I had heard of none of these books.  None of them.  I probably still haven’t.

Indeed, I am somewhat ashamed of my lack of literary knowledge.  My annual vacation to Chicago often includes a humbling moment when I stand by silently like an ignorant mute while my best friend and one of the Culturephiles discuss the half-dozen tomes they’ve cranked through that week.  They chat away about the latest additions to their overcrowded bookshelves as I daydream about monkeys riding dogs like horses.

[I should depart briefly here to mention that I enjoy both referring to and conceptualizing of the Culturephiles as a band of crime-fighting superheroes.  Superheroes with the power of erudition.]

I realize that my own website will have to include at least a bit of literary analysis if it’s to be a fully-formed cultural arbiter.

To that purpose, then, I present the first of what will hopefully be many such articles.  Note that I’m calling the series the Axis of Ego “Review of Books,” because I’ve noticed that that’s the phrasing used by the most reputable and respected journals.  In other words, you read book reviews in your local newspaper.  A Review of Books exists to be clutched by well-manicured hands extending from elbow-patched tweed jackets.

So, at last, we come to our very first book.  I wanted to select something worthy of a Culturephile-quality analysis.

For those who are unfamiliar, Rhodes is the elder son of former multi-time NWA World Heavyweight wrestling champion Dusty Rhodes (a/k/a “The American Dream,” a/k/a Virgil Runnels).  Dustin became most famous as a bizarre, implicitly-gay WWF character known as Goldust during the 1990’s. 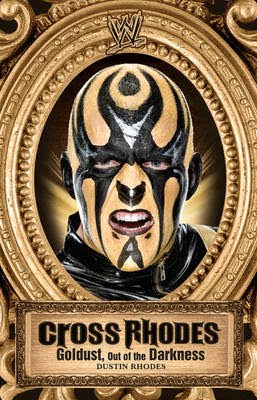 He devotes much of the early portion of the book to detailing difficulties involving the relationship with his famous father.  In a departure from many future wrestlers in similar circumstances, Rhodes actually didn’t resent his father for his success or the lifestyle that had the American Dream on the road well over 300 days per year.  The problems between father and son actually arose from Dusty’s objection to Dustin’s romantic choices (in this case, Terri Runnels, a/k/a “Marlena,” a/k/a “Alexandra York”).  A flap over a cancelled golf outing due to family commitments led to a five-year silence between the men, foreshadowing a future incident between myself and Mike Austin sometime in late 2011 or early 2012 after the birth of his son.

This being a wrestler’s biography, you know going in that there are certainly going to be some demons.  Oh, boy, are there demons.  Big, hairy ones with sharp teeth.*

Rhodes’ addiction to prescription painkillers ramped up in the late 90’s and early 2000’s to the point where he was washing 20-40 pills down with a half-gallon of vodka every day.  He briefly dabbled in cocaine just before hitting rock bottom.

The writing style is straightforward and simple, but it’s also clear and reasonably-articulate.  I don’t have a problem with this, because the book actually reads like it was written by Rhodes, and not one of the not-so-talented WWE ghostwriters who seemed to churn out an autobiography every couple of months during the latter part of the Attitude Era.  This is a good thing.

There aren’t too many revelations in Cross Rhodes.  A few of the Goldust-related stories are interesting, but they don’t break any new ground for those who have even loosely followed Rhodes’ career.

Even readers with a basic understanding of professional wrestling stereotypes won’t be surprised by much here: I had a difficult and complicated relationship with my father.  Wrestling is a tough business.  I’m on the road all the time, and my body takes a beating most fans don’t understand.  Wrestling is more demanding and more painful than it looks.  That’s why I first turned to pills and booze.  Then I went into rehab.  I’m better now and happier than ever.  I love my new romantic interest, and she helps me remain on the straight and narrow path to salvation.  And so on.

I’m not trying to belittle Rhodes or his story.  It’s just that it’s a very familiar story.

The good news is that it doesn’t end with him murdering his family.

Rhodes comes across as someone who has a better chance than most of his peers to make it to age 60 without suddenly dying.  Not only has he been sober for over two years and is probably in the best physical shape of his career, but, more to the point, he is one of the very few successful performers to have debuted pre-1994 and never used steroids.  Rhodes plausibly attributes this to the fact that he was both naturally a big guy, as well as the fact that his father never used PEDs during his career (since, if Dusty had taken steroids, he would have had to break his longstanding tradition of not working out).

He also comes across as someone mature enough to take responsibility for the numerous mistakes he’s made in his life, almost to the point of being overly-hard on himself.  Which would be appropriate, given the character he’s portrayed for most of his career.  Oops.  I think I just heard a telltale clunking sound indicative of a plummeting Brow-O-Meter.

In any event, you could do a lot worse than breezing through Cross Rhodes.  It’s not particularly memorable, and it barely scratches the surface of the underlying content in many places.  However, there’s not much negative I can say about a one-day read that is at least an honest and open look at someone’s life – even if that life story has an all-too-familiar ring reminiscent of countless members of the author’s profession.

I can honestly say it’s the best book I’ve read this year.

*Although formidable, Rhodes’ demons look downright tame compared to the ones faced by, say, Jake Roberts.